Researchers from the American Institute of Physics in Maryland have designed vacuum suction cups that allow man and robot to defy gravity and climb walls, even if they are scaling a rough surface.

Previous vacuum grippers couldn't maintain suction on rough surfaces because of leakage. The researchers use a zero-pressure difference (ZPD) method that uses a high-speed rotating water ring between the surface and suction cup to maintain the vacuum.

The grippers have potential in many industrial applications, but what we really want to know is if we can use them to scale the Washington Monument.

The researchers call them Spider-Man-style grippers, but as you can see from the video, they aren't scaling walls as quickly as your friendly neighborhood web-slinger. (Maybe the geriatric version from Reign.)

Now, Wang and a team of researchers have created a new camera. This one only takes 1 trillion photos per second, but it can take pictures of the invisible.

In recent tests, the camera captured a shockwave created when a laser struck the water, and a pulse of laser light traveling through a crystal.

Wang calls it phase-sensitive compressed ultrafast photography (pCUP), and it's a combination of his previous camera and phase-contrast microscopy, a 100-year-old technology that images how light waves slow down and speed up when entering and leaving materials.

The technology is still in development, but it has potential in biology and chemistry, among other fields.

Wang hopes that one day he can harness the technology to watch as signals travel through a network of neurons or flames spread in a combustion chamber.

This next one comes to us from Chuck in South Carolina, who emailed us this story with a single sentence: I'm not sure if this is a good thing.

A team of researchers from Tufts University has used frog stem cells to create "entirely new lifeforms." According to the researchers, these are the first living robots.

A report from the Guardian, via Futurism, says that the xenobots are only a millimeter-wide and created by re-assembling skin and heart cells harvested from African clawed frog embryos.

The skin cells are passive, and the heart cells expand and contract to propel the xenobots. An algorithm configures the xenobots shape for a specific task. For example, it can build a form designed to move forward or include a spot for microscopic storage.

Because they are biological material, the xenobots can heal themselves, and after completing an assigned task, they can be programmed to self-destruct. Right now, the xenobots live for about 10 days, but unlike their metal or plastic counterparts, they're incredibly biodegradable.

Next, the team is discussing adding additional senses and other capabilities, even eyes. Like previous nanobots designed before them, they hope the xenobots could one day clear human arteries, clean up the oceans, or remove radioactive waste.

If you're worried about the robot apocalypse, you can calm down. A student on the project told the Guardian, "it’s hard to fear that these things are taking over any time soon.” What do you mean soon?

You know what, Chuck? I’m not sure this is a good thing either. 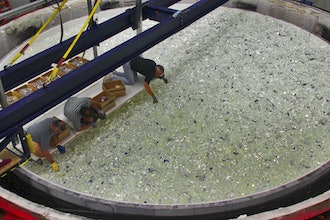 How to Build a Mirror for One of the World's Biggest Telescopes?

The question is how to build something substantially bigger than the current generation.
August 19, 2022

It doesn't do enough to address concerns about working conditions.
August 19, 2022

A Look at the World's Skinniest Skyscraper

The building is the second-tallest residential tower in the Western Hemisphere.
August 18, 2022

Authorities said the problem did not appear to stem from low water levels.
August 18, 2022

The PONSSE EV1 concept has been developed for forwarders with a 15-ton load-carrying capacity.
August 17, 2022

The new facility is nearly fully automated, the only task that is truly done by hand is the actual picking of parts.
August 18, 2022

The federal lawsuits could prove costly to Union Pacific.
August 18, 2022

The worker was removing polyethylene foam from an extruding machine when a static discharge ignited a flammable gas.
August 17, 2022

The expansion will include new equipment and the conversion of office space into an employee training facility.
August 17, 2022

How Xometry and Nexa3D joined forces to usher in the next stage of additive manufacturing with the introduction of the XiP desktop 3D printer, powered by Nexa3D’s LSPc technology.
August 17, 2022

Makers of solar panels, cement and urea closed or reduced production after they were ordered to ration power.
August 17, 2022

The builder of Electrical Discharge Machines also has a new location.
August 17, 2022

The company will ramp up production of fabricated parts and metal components for the aerospace industry.
August 16, 2022

It was standard practice to bypass installed safety features.
August 16, 2022