The ban was instituted after a sniper used the device to massacre dozens of Las Vegas concertgoers. 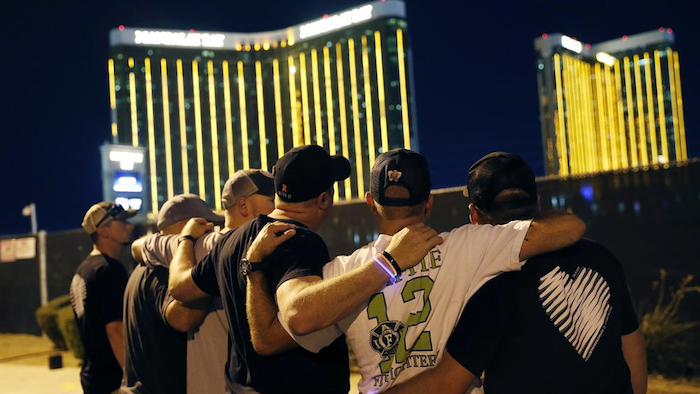 Survivors return to the scene of a mass shooting on its first anniversary in Las Vegas, Oct. 1, 2018.
AP Photo/John Locher, File

NEW ORLEANS (AP) — A federal appeals court in New Orleans is the latest to uphold a federal ban on “bump stocks” — devices attached to semiautomatic firearms so that a shooter can fire multiple rounds with a single trigger pull.

The ban was instituted in 2019 by the Trump administration after a sniper in Las Vegas used the device to help him massacre dozens of concertgoers in 2017 in the deadliest mass shooting in modern U.S. history. The U.S. Supreme Court could decide next year whether to hear arguments on the ban.

The 5th U.S. Circuit Court of Appeals, in a decision dated Tuesday, affirmed a Texas-based federal judge’s ruling in a lawsuit challenging the ban.

A challenge failed recently in the Cincinnati-based 6th Circuit when judges split 8-8 on the issue. Another challenge is on appeal to the Supreme Court, arising from an unsuccessful attempt to overturn the ban at the Denver-based 10th Circuit.

The ban was instituted by the U.S. Bureau of Alcohol, Tobacco, Firearms and Explosives in a rule declaring that bump stocks are classified as “machineguns,” banned by National Firearms Act.

According to the ATF, bump stock devices harness the recoil energy of a semiautomatic firearm so that a trigger “resets and continues firing without additional physical manipulation of the trigger by the shooter.” The National Firearms Act, according to the court records, outlaws weapons that fire continuously with “a single function of the trigger.”

Opponents of the ATF rule argue that the trigger itself functions multiple times when a bump stock is used. Judge Stephen Higginson, writing for the three 5th Circuit judges that ruled Tuesday, disagreed, quoting from a lower court ruling in the 10th Circuit case.

"As one district court has observed, there is no reason why ‘Congress would have zeroed in on the mechanistic movement of the trigger in seeking to regulate automatic weapons,’ given that the 'ill sought to be captured by this definition was the ability to drastically increase a weapon’s rate of fire, not the precise mechanism by which that capability is achieved,'" Higginson wrote in an opinion joined by judges James Dennis and Gregg Costa.