Workers say the company refused to allow them to go home as severe weather bore down on the city. 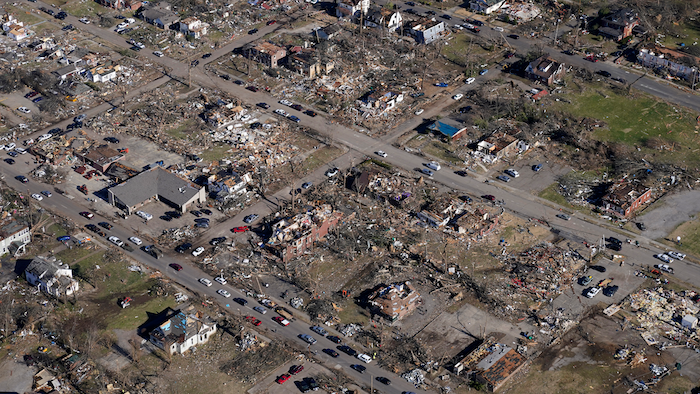 MAYFIELD, Ky. (AP) — Survivors of a tornado that leveled a Kentucky candle factory, killing eight workers, have filed a lawsuit claiming their employer demonstrated “flagrant indifference” by refusing to allow employees to go home early as the storm approached.

As legal fallout from the catastrophic weather started surfacing, steady rainfall added to the survivors' misery. As they picked through what remained of their homes, roofers patched holes and cleanup crews removed massive piles of downed trees and other debris. Storm-stricken parts of western Kentucky could get up to 2 inches (5 centimeters) of rain by Sunday, officials said.

“It’s not right for the people who have had their homes knocked down, that are trying to salvage it, are now having all this rain on top of it,” Kentucky Gov. Andy Beshear said Thursday.

The lawsuit, filed in state court late Wednesday, accuses the Mayfield Consumer Products candle production company of violating Kentucky occupational safety and health workplace standards by keeping its staff at work despite the danger of death and injury. The lawsuit claims that workers were threatened with termination if they left in the hours before the tornado hit. The suit seeks compensatory and punitive damages.

Bob Ferguson, speaking on behalf of the company located in the western Kentucky town of Mayfield, previously insisted that employees were free to leave anytime, and he denied that they would have faced retribution if they left the factory. Ferguson did not immediately return phone calls seeking comment Thursday.

The company’s CEO, Troy Propes, said in a statement Wednesday that the company was retaining “an independent expert team” to review the actions of managers and employees leading up to when the tornado struck the factory.

“We’re confident that our team leaders acted entirely appropriately and were, in fact, heroic in their efforts to shelter our employees,” Propes said. “We are hearing accounts from a few employees that our procedures were not followed. We’re going to do a thorough review of what happened.”

The lawsuit claims the factory had “up to three and half hours before the tornado hit its place of business to allow its employees to leave its worksite as safety precautions.” The factory showed “flagrant indifference to the rights” of the workers by refusing to do so, the lawsuit said.

Factory employee Haley Conder told The Associated Press on Tuesday that a supervisor threatened her with written disciplinary action if she went home early because storms were approaching.

Conder questioned why the company did not encourage workers to go home — or at least give them a better understanding of the danger — between a first tornado siren around 6 p.m. Friday and another one around 9 p.m., shortly before the tornado hit.

The only plaintiff identified in the lawsuit is Elijah Johnson, who was working the night shift at the candle factory when the storm struck. The wording of the lawsuit says it was filed by Johnson and on behalf of “others similarly situated.” Others aren't identified by name for “fear of reprisal,” Jones said.

After days of not knowing how many workers died at the factory, authorities are now “pretty close to certainty” that no more than eight perished, Beshear said Thursday.

The governor said it was “an absolute miracle” that more lives were not lost. “I will tell you, I was almost certain that the number would be 70,” he said. “But thank God, others either left or escaped.”

More than 100 people were working on candle orders when the twister flattened the facility. The company later said many employees who survived left the site and went to homes with no phone service, adding to the confusion over who was missing.

The lawsuit was filed less than a week after the storms that began Friday night destroyed lives and property from Arkansas to Illinois and in parts of neighboring states, carving a more than 200-mile (320-kilometer) path through Kentucky alone.

Beshear has said that Kentucky’s workplace safety agency would look into the eight deaths. That kind of investigation is routine whenever workers are killed on the job.