The proposal would add new rail lines and barges that could be controlled by technology. 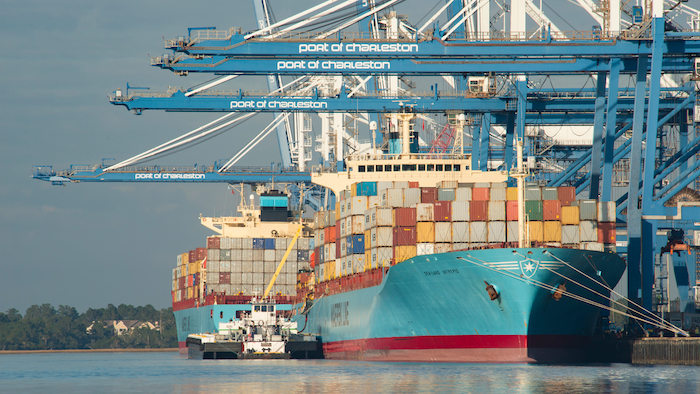 COLUMBIA, S.C. (AP) — Some of South Carolina's longest serving and most powerful senators began their push Tuesday to get the state to borrow $550 million to bring more technology and rail service to the port in Charleston.

They were met with skepticism from other senators who questioned whether the state should let a private company handle the upgrades, wanted more oversight of the State Ports Authority or wondered if the proposal had been fully vetted.

The up to $550 million would go for new rail lines to allow more containers to go straight from ships to trains as well as barges that could be controlled by technology to move containers from terminal to terminal. There would be projects to expand roads, add cranes and other infrastructure.

The start of debate on the proposal brought Senate Finance Committee Chairman Hugh Leatherman down to the Senate floor. The 89-year-old Florence Republican has spent much of this session in the balcony to lessen his risk of getting COVID-19.

“It’s not often in a Senate career you get to decide on something that will drive the economic engine of the state for decades to come," Leatherman said. “Our goal is to be the preferred port on the East Coast, period.”

A new terminal opening soon at the Charleston port is named for Leatherman in honor of his 37 years in the Senate.

The debate is likely to go on several days. $550 million is about 5% of the state budget that lawmakers have control over spending, but the state would pay back the bonds at $43 million a year over 15 years. South Carolina last issued bonds to this scale in 1999 when they borrowed $750 million for school buildings.

State Sen. Dick Harpootlian, who gives great scrutiny to how tax money is spent on economic development and private business, warned fellow senators to take their time and be careful.

The Columbia Democrat said just a 45-minute review of the proposal after it was brought up Tuesday left him seeing several red flags, including how South Carolina planned to make the Ports Authority more responsive to state control.

“There’s a lot of money at stake here, and believe it or not, there are a lot of lawyers out here looking to get a piece of the action," Harpootlian said.

Currently, the Port Authority is not totally considered a public body nor is it a private firm. State Sen. Nikki Setzler said part of the proposal would require them to tell lawmakers and others about their financial status, who they hire and fire and how they spend their money.

“They are now going to answer on an annual basis those tough questions on what they did," said Setzler, a West Columbia Democrat who is the longest serving senator at 44 years.

A few senators questioned why the state needed to spend money when a private company could build the rail lines. Setzler said by having the state loan the Port Authority the money, they could assure the tracks could be used by anyone.

Setzler also pointed out the state spent $120 million on tax breaks in 2019 to get the Carolina Panthers pro football team to move their practice fields from Charlotte, North Carolina, to Rock Hill, South Carolina.

“We gave a buttload of money to the Panthers. And that is a private entity," Setzler said.

State Sen. Tom Davis told senators he planned to vote for issuing the bonds as long as port officials answered his questions about a long talked about but never worked on joint port proposal with Georgia in Jasper County, South Carolina, near the mouth of the Savannah River.

At the Charleston port, South Carolina has to keep spending money like $400 million to deepen Charleston Harbor. There are no bridges to work around at the Jasper County site and rail lines and all other infrastructure can be built to exact specifications out of the box, said Davis, R-Beaufort.

“We've got to see the whole board here,” Davis said.