The rupture devastated the city of Brumadinho and killed more than 270 people. 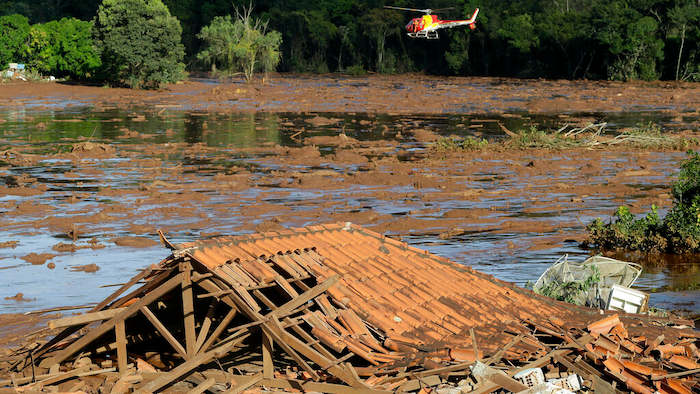 RIO DE JANEIRO (AP) — Brazilian mining giant Vale signed a settlement deal on Thursday to pay 37.7 billion reais ($7 billion) to the state of Minas Gerais, following the collapse of a dam two years ago that devastated the city of Brumadinho and killed more than 270 people.

The rupture of the dam at Vale’s iron ore mining complex unleashed a torrent of mining waste, burying the equivalent of 300 soccer pitches under thick mud. Minas Gerais officials said Thursday that 11 people are still missing.

While officials heralded one of the largest settlements ever realized in the country on Thursday, three civil society groups told The Associated Press that victims had been left out of negotiations.

“It was an agreement made behind closed doors, without the participation of those affected," said Joceli Andrioli, part of the Movement of People Affected by Dams, who has been assisting families of victims. About 106,000 people are receiving monthly payments from Vale while awaiting a settlement, and haven't yet been informed what each now stands to receive, he said.

Officials said about 30% of the total will go to Brumadinho, with funding for victims' loved ones, environmental projects and job creation.

But billions will also finance costly projects across the state, including a new perimeter road around capital Belo Horizonte and improvements for its subway, according to information from Minas Gerais state. Those investments will benefit residents of the city and state politicians rather than improve the lives of those who have suffered most, said Andrioli.

Riverside communities and farmers whose livelihoods were wrecked will also receive some compensation. The dam had held back mining waste known as tailings. Federal prosecutors found that some 12 million cubic meters (423 million cubic feet) of tailings were released, polluting the nearby Paraopeba River that is a major source of water for irrigation and fishing.

"Riverside communities still cannot use the water from the Paraopeba,” said Malu Ribeiro, a project coordinator at SOS Mata Atlantica, who collected water samples in Brumadinho. She said the “tsunami of contaminated waste” polluted more than 350 kilometers (218 miles) of the waterway.

Environmental studies carried out by SOS Mata Atlantica found heavy metals at levels above those permitted by law. “Elements like iron, copper and manganese, in high concentrations and at present levels, are even carcinogenic,” Ribeiro said.

Prosecutors also found evidence that companies knew the mine was operating with “unacceptable” safety conditions. German auditing firm TÜV SÜD, which was responsible for technical security studies, drafted “false declarations of stability” with the aim of keeping activity going at Vale’s mine, prosecutors charged.

TÜV SÜD has said the cause of the dam failure still hasn’t been conclusively clarified, and that it is cooperating with the investigation. Attorneys representing some of the executives facing possible charges have also denied wrongdoing in the past.

“We know that we have a long way to go and we remain firm in our purpose,” Vale’s chief executive, Eduardo Bartolomeo, said in a statement Thursday.

In 2015, Vale was involved in another dam disaster in the city of Mariana, also in Minas Gerais state. In that incident, 19 people died and hundreds were forced to abandon their homes.