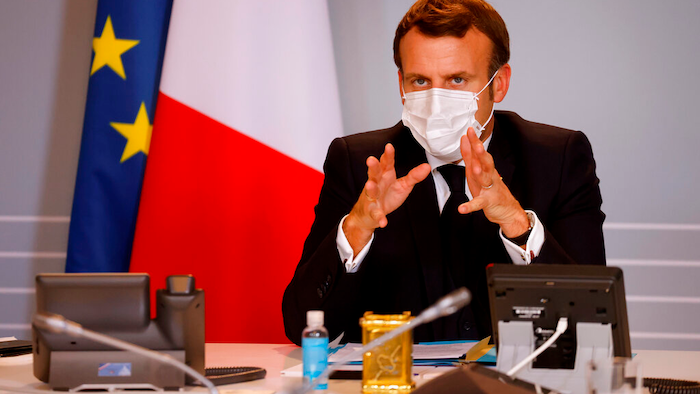 PARIS (AP) — French President Emmanuel Macron has turned to international CEOs to promote France’s recovery plan aimed at saving jobs and pave the way for a greener, more competitive economy as the country is struggling amid the virus crisis.

Macron spoke in a videoconference Friday with CEOs of eight major international groups in an effort to convince them that France is a relevant choice at times when they are looking into European countries’ economic strategies to decide where to invest.

Macron said his economic policies aim at making “our country stronger after the crisis than before.”

CEOs of U.S. group Coca-Cola, China’s renewable energy group Envision, India’s industrial Tata and British-Dutch consumer goods company Unilever were invited to the online meeting, along with others that have potential interests in France.

“We decided to have a very strong economic answer at the very beginning of the pandemic last spring" to save jobs and business, Macron said.

He then promoted the country's 100 billion-euro ($119 billion) plan, called “France Reboot," which includes 40 billion euros ($48 billion) from the EU recovery plan. Money will be spent on green energy projects, the digital economy and other policies making the country more competitive.

“Modernization and attractiveness are still core for our economic strategy. We decided to invest in order to face this pandemic, and we will follow-up," Macron said.

The French government imposed last week a partial lockdown meant to slow down the spread of infections while trying to keep the economy afloat.

More than 39,000 people with the virus have died in France, the third highest death toll in Europe after the UK and Italy.

In March-April, a stricter lockdown hit the economy, which is expected to contract by 11% this year according to government forecasts.

The French government hopes growth will return in 2022 to its 2019 levels, and has repeatedly vowed not to raise taxes.