Complaint Filed Over Proposed Lithium Mine

Conservationists accused an Australian mining company of misleading investors about the project. 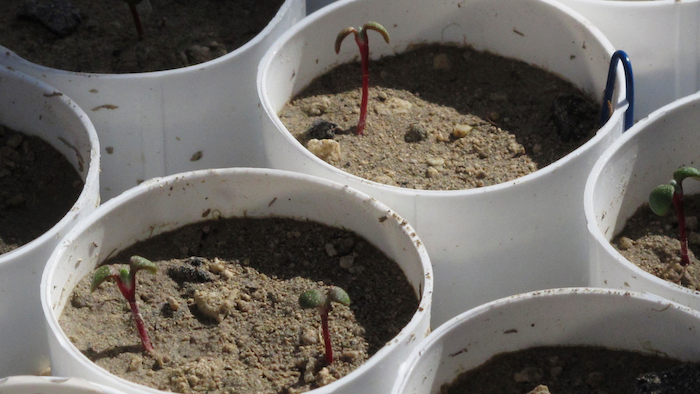 Tiny stems of Tiehm's buckwheat growing in a greenhouse at the University of Nevada in Reno, Feb. 10, 2020.
AP Photo/Scott Sonner, File

RENO, Nev. (AP) — Conservationists have filed a complaint with the Securities Exchange Commission accusing an Australian mining company of misleading investors about how soon it might start building a Nevada lithium mine at the center of a fight over a rare desert wildflower.

Ioneer Ltd. told investors in July its goal was to have all the necessary regulatory approvals in place by next summer for the project they estimate could be worth more than $1 billion.

But a government official told The Associated Press that U.S. land managers don’t anticipate making a formal decision on the fate of the environmentally sensitive project until January 2022.

The Fish and Wildlife Service currently is considering whether to order endangered species protection for Tiehm’s buckwheat at what’s believed to be one of the most promising untapped lithium deposits in the world about 200 miles (320 kilometers) southeast of Reno.

It’s also the only place on earth the plant is known to exist.

The Center for Biological Diversity filed the SEC complaint Tuesday against Ioneer, which stated in a quarterly report to investors in July that its “aim is to be `shovel ready’ and permitted by Q2 2021” — the second quarter of 2021 ending June 30.

The center cited a Bureau of Land Management document it obtained last month that indicated as recently as May the agency didn’t anticipate issuing a formal record of decision for the project on federal land until December 2021.

“Thus, it does not appear possible for Ioneer to complete the BLM permitting process and be `shovel ready’ by Q2 2021,” Patrick Donnelly, the center’s Nevada state director, wrote in the complaint to the SEC.

A copy of the agency timeline the center provided to the AP indicated the bureau projected this spring that permitting would be complete and a record of decision issued Dec. 23, at the earliest.

“Investors shouldn’t be deceived about the time involved for the extremely complicated permitting this mine will require,” Donnelly said in a statement.

The agency confirmed late Tuesday it doesn’t expect to decide whether to approve the project before January 2022.

“We currently anticipate issuing a Notice of Intent and beginning public scoping for the proposed Rhyolite Ridge Project in January 2021. Therefore, we should be ready to issue a decision 12 months after that,” Bureau of Land Management spokesman Jess D. Harvey wrote in an email to AP.

“There is always going to be opposition to development from some quarters, but we continue to move forward on the Rhyolite Ridge project in a responsible manner and in line with our stated project timeline,” he said in a statement emailed to AP Tuesday night.

Last October, the Center for Biological Diversity petitioned for a federal endangered species listing of Tiehm's buckwheat and filed a lawsuit against the bureau in a bid to halt the project. The center withdrew the lawsuit in January, but Donnelly vowed that efforts to protect the flower would continue.

The Fish and Wildlife Service announced July 22 — two days after Ioneer issued its report for the quarter ending June 30 — it had received enough scientific information to warrant a full-year review to determine whether the plant deserves Endangered Species Act protection.

A federal listing won't preclude but could further delay the mining project.

Ioneer has spent millions at the site rich with lithium needed to manufacture such things as batteries for Tesla’s electric cars. It has also entered into a multiyear research agreement with scientists at the University of Nevada, Reno, who are studying whether it might be possible to transplant buckwheat grown in a campus greenhouse to the wild.

The report to investors July 20 touted a recently completed feasibility study “showing compelling project economics” at the “only known lithium-boron deposit in North America and one of only two known such deposits in the world.”

The study projected an after-tax value of $1.265 billion.

“The delivery of the Definitive Feasibility Study confirmed our long-held view that Rhyolite Ridge, is a world-class asset with robust economics for a low cost, large-scale and long-life project,” Rowe said at the time.

Donnelly acknowledged in his complaint to the SEC it is possible that Ioneer had not seen the scheduling spreadsheet in the bureau documents his group obtained and may not have been aware that the company’s projections about starting construction of the mine were unrealistic.

But “it would be highly unusual for BLM to develop such a timeline without consulting with Ioneer and their contractors, so it is our belief that Ioneer knows or should know of the timeline,” Donnelly wrote in the SEC complaint.