Adidas provided redesigned shoes to players in time for the pandemic-delayed final games of the Champions League. 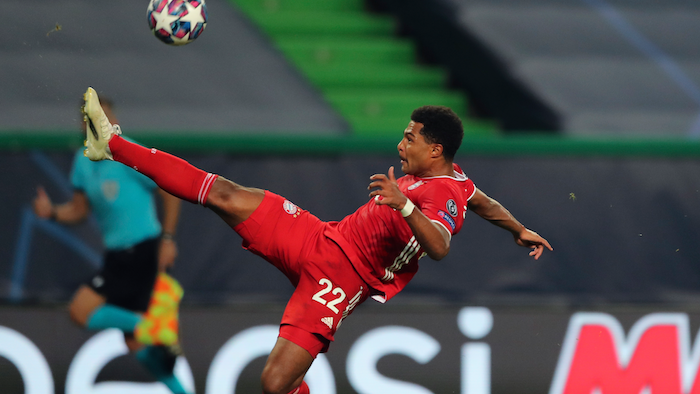 Serge Gnabry of Bayern Munich tries to control the ball during a match against Lyon, Jose Alvalade stadium, Lisbon, Aug. 19, 2020.
Miguel A. Lopes/Pool via AP, File

Serge Gnabry has three goals in two games for Bayern Munich, and rival winger Angel Di Maria scored one and set up Paris Saint-Germain's other two goals in the semifinals.

The pandemic-enforced extension to the European season meant the new boots (or cleats) were ready for Gnabry and Di Maria and other Adidas-backed players to wear at the Champions League mini-tournament which ends Sunday with Bayern playing PSG in the final.

Adidas X Ghosted is designed to support rapid changes of direction, as well as the players' need for acceleration and propulsion, according to the manufacturer.

“What we have done is deconstruct that sprint spike and that sprint spike knowledge and completely rebuilt it in the context of football and its specific movements," Adidas Senior Product Manager Philipp Hagel told The Associated Press. “What we did here is not just slam carbon fiber in. We put in a specifically engineered ... tunable carbon-fiber piece."

The use of carbon-fiber plates by rival company Nike in track shoes raised concerns that they threaten the integrity of the sport because they act like a lever to reduce the work at the ankle.

Independent and company-sponsored studies have found that the shoe gives runners a 4% edge in energy efficiency. The World Athletics governing body has prohibited any shoe with a sole thickness of more than 40 millimeters, or that contains more than one plate.

Adidas says its football boot is fully compliant with regulations.

“I’ve got a lot of friends and colleagues who are working in running," Dave Surace, the Adidas senior director of football footwear, told the AP. “The legality and the loopholes of that has been tricky I think for everyone involved.”

“A lot of the project was based around an idea, but ingredients didn’t exist yet,” Surace said. “We had to invent and create a lot of the materials and processes ourselves along the way."

It's a very delicate technology, with carbon soft at low speeds but stiffening as more energy is put into it under full load.

“Carbon fiber is lightweight and has a high amount of energy return,” Surace said. "The worst case scenario is if it breaks, it’s brittle. It goes past the point of no return and then it doesn’t return. It’s not plastic.

“And you have catastrophic failure. You see these things in professional bicycle racing or angry tennis players slamming the rackets on the ground. When it’s done, it’s done ... it fully breaks.”

Ultimately, the designers will be hoping this boot allows the players wearing them in the Champions League final on Sunday to be the fastest versions of themselves.