The company clarified its workplace policy after President Trump urged supporters to boycott its tires. 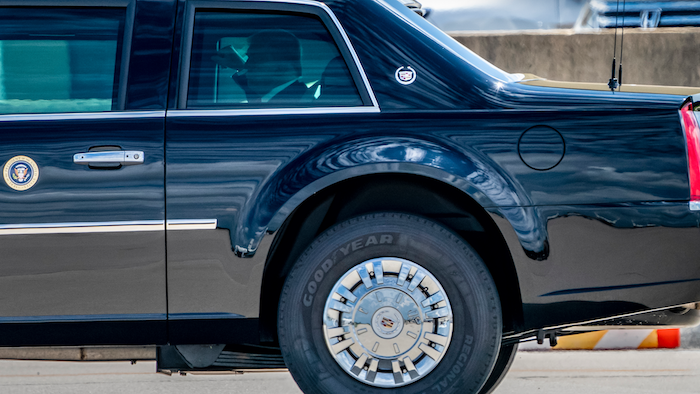 WASHINGTON (AP) — The CEO of Goodyear Tire and Rubber Co. said Thursday that it will allow employees to wear attire supporting law enforcement, though it will continue to ask them not to express support for any political candidates while on the job.

In a letter Thursday addressed to “Goodyear Customers,” CEO Rich Kramer wrote that the company “strongly supports our law enforcement partners.” He said the company has clarified its policy "to make it clear associates can express support for law enforcement through apparel at Goodyear facilities.”

President Donald Trump on Wednesday urged supporters to boycott Goodyear tires, tweeting that the Ohio-based company had “announced a BAN ON MAGA HATS.”

But the company didn’t announce such a specific ban. It asks employees to refrain from workplace expressions involving political campaigns and “forms of advocacy that fall outside the scope of racial justice and equity issues.” “Make America Great Again,” or “MAGA,” is a Trump campaign slogan.

“Get better tires for far less! (This is what the Radical Left Democrats do. Two can play the same game, and we have to start playing it now!),” Trump tweeted.

Kramer reiterated Thursday that Goodyear has “a longstanding corporate policy that asks associates to refrain from workplace expressions in support of any candidate or political party.”

Trump’s tweet followed a report from WIBW-TV in Topeka, Kansas, based on an anonymous Goodyear employee’s screenshot that listed Black Lives Matter and Lesbian, Gay, Bisexual, Transgender Pride messages as acceptable while politically affiliated slogans and material, including “MAGA Attire” and “Blue Lives Matter,” in support of police, were listed as unacceptable. The screenshot was described in the report as part of the company’s diversity training.

Kramer wrote that the visual was created by an employee at the company’s Topeka factory and “was not approved or distributed by Goodyear corporate or anyone outside of that facility.”