The picturesque reefs support a wide range of species waging a constant battle for space. 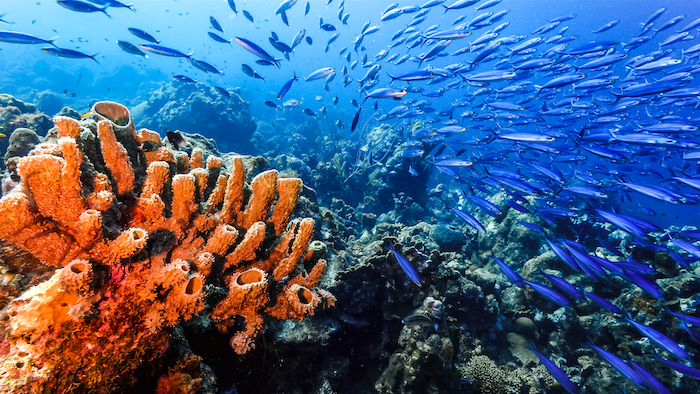 Many factors must be kept in mind when designing a hospital, a factory, a shopping center or any industrial plant, and many questions can arise before deciding on the floor plans. What is the best placement for each different space? What distribution is the most appropriate in order to improve efficiency in these large areas? University of Cordoba researchers Laura García and Lorenzo Salas are trying to provide an answer to these questions, and to do so, they have turned to the marine world to simulate the behavior of coral reefs.

Within these picturesque underwater structures, holding a wide range of species biodiversity, there is a constant battle for space, where available hollows are fully optimized in pursuit of survival. It is precisely this natural distribution model that has led the way for this research team, who over the last few years has been working towards answering the following question: What is the best solution when designing the layout of an industrial plant?

The first to incorporate the behavior of these coral reefs into a computer algorithm was researcher Sancho Salcedo, at the University of Alcalá de Henares, in 2013. Since then, and stemming from a partnership, the team established a line of research inspired by the life and reproduction of these living beings in order to make the most of space. Recently, the group published a new article that improves upon this bio-inspired algorithm. "Instead of simulating a flat coral reef, as we had done previously, we were able to replicate the structure in three dimensions, making it possible to come up with many more solutions and offer better results", explains lead author of the research, Laura García.

In the real world, the algorithm is able to offer novel designs that had not been assessed before and new floor plans for how an industrial plant could look when space is optimized to the utmost, resulting in saving money and improving the efficiency of these buildings. To do so, after validating the new tool in different industrial areas such as a slaughterhouse, paper and plastic recycling plants and buildings of up to 60 departments, the algorithm is capable of factoring in different variables such as distribution, amount of material, the cost of moving said material from one place to another, noises to avoid and necessary parameters of proximity and remoteness.

An algorithm that includes subjective preferences

In this respect, over the last few months the team has published other work that delves deeper into the same line of research in highly regarded scientific journals. Recently, the group was able to incorporate an interactive tool into the algorithm that includes subjective preferences in the design. "By means of a device that analyzes the way the person in charge of designing the project looks at the floor plans and the degree to which their pupil is dilated, their opinion can be transmitted to the floor plans being proposed", underscores Laura García.

The research carried out over the last few months, in which other UCO professors such as José Antonio García, Carlos Carmona and Adoración Antolí also participated, made it possible to establish partnerships with universities in Portugal, Saudi Arabia and the United States, with contributions from José Valente de Oliveira (at the University of Algarve), Sancho Salcedo Sanz (at the University of Alcalá de Henares) and Ajith Abraham (at Machine Intelligence Research Labs).