Whoever takes over global trade's governing body has a major task ahead of them. 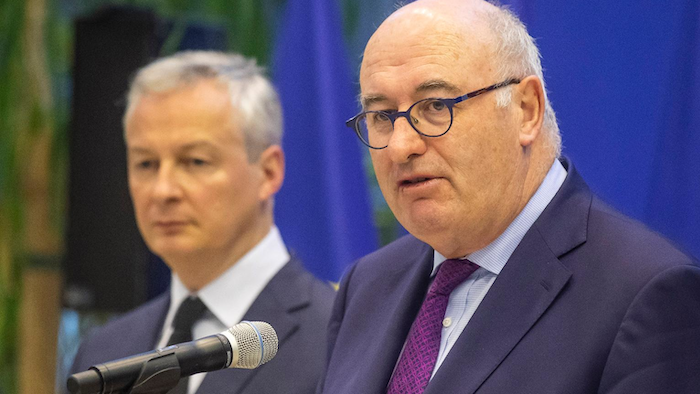 BRUSSELS (AP) — The European Union’s trade commissioner said Tuesday that he is considering standing for the top job at the World Trade Organization if the 27 EU countries endorse him, but he maintains that whoever takes over at the helm of global trade's governing body has a major task ahead of them.

Current WTO Director-General Roberto Azevedo announced last month that he will step down on Aug. 31, ending a seven-year tenure marked recently by intense pressure from U.S. President Donald Trump, who has repeatedly accused the Geneva-based trade body of “unfair” treatment of the United States.

“Certainly, I am exploring the option of being a candidate for the director-general of the WTO,” EU Trade Commissioner Phil Hogan told reporters after video-conference talks with the bloc’s trade ministers.

“I think there is an important amount of work to be done to reform the organization, to make it is more effective and efficient but also to deal with many of the important trade issues that are bedeviling the international community now arising from COVID 19,” Hogan said.

Hogan, who is from Ireland, only took up his post in Brussels six months ago and is deeply involved in trade talks linked to Britain’s departure from the EU. He said he in an “exploratory stage” of his WTO candidature as he awaits a green-light from the 27 member countries, possibly in coming weeks.

Hogan said he was “heartened” to hear a majority of ministers say that Europe should have a candidate in the running.

Azevedo said he was stepping down for personal, family reasons. But the WTO he led was often in the firing line of the Trump administration, which has accused it of letting China get away with unfair state subsidies and for allegedly strong-arming foreign businesses into giving up their intellectual property in order to gain access to the giant Chinese market.

The 25-year-old trade body has never had to fill a vacancy for the director-general post before a term expired, and under WTO rules, a selection process for a successor has to begin as soon as possible.