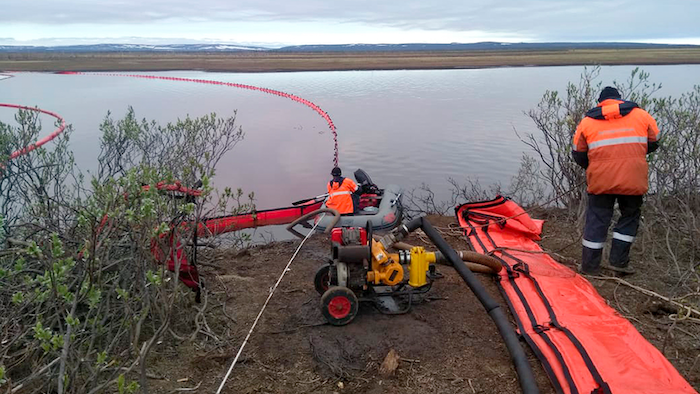 Rescuers work to prevent the spread of an oil spill outside Norilsk, Russia, June 2, 2020.
Russian Marine Rescue Service via AP

MOSCOW (AP) — Russian President Vladimir Putin on Friday chastised the billionaire owner of a nickel giant for negligence over a massive fuel oil spill that has inflicted huge damage on a fragile Arctic region.

An estimated 20,000 tons of diesel oil spilled into the Ambarnaya River last Friday from a broken tank at a power plant in Norilsk, 2,900 kilometers (1,800 miles) northeast of Moscow. Booms were laid across the river to prevent the fuel oil from getting into a lake downstream that feeds another river leading to the environmentally delicate Arctic Ocean.

Putin has declared a state of emergency in the region to help minimize the consequences of the spill. The power plant is operated by a division of Norilsk Nickel, whose giant plants in the area have made Norilsk one of the most heavily polluted places on the planet.

Investigators have started looking into the cause of the accident and local officials' failure to quickly report it to federal authorities. The company said the accident might have been triggered by melting permafrost.

During Friday’s call with officials and environmental experts, Putin lashed out at Norilsk Nickel owner Vladimir Potanin, saying it was his company’s responsibility to check the fuel tanks' condition.

“There wouldn’t have been the damage to the environment if you replaced them in time,” Putin told Potanin, who is Russia’s richest man with an estimated fortune of $25.5 billion, according to Forbes magazine.

Potanin said that his company will pay for the cleanup efforts that he estimated at 10 billion rubles ($146 million) and will also stand ready to pay fines for damage to the environment.