Her pay package was valued at $58.5 million. 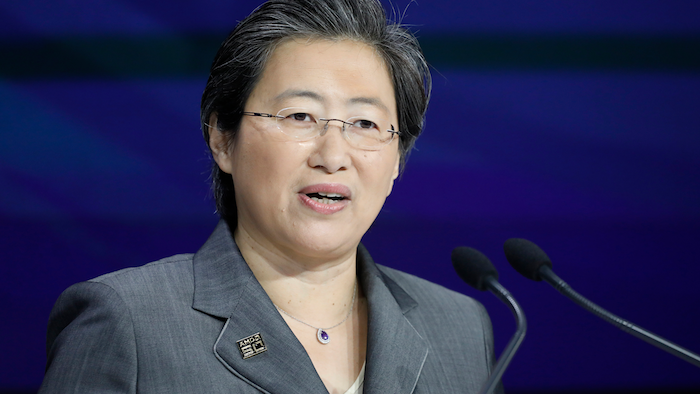 Lisa Su of Advanced Micro Devices is the first woman ever to top The Associated Press’ annual survey of CEO compensation: Her 2019 pay package was valued at $58.5 million following a strong performance for the company's stock during her five years as CEO.

The median pay for women on the list was $13.9 million, versus $12.3 million for men. Pay for women was up 2.3% from last year, looking at the median; the median change for men was 5.4%. And, women remained significantly underrepresented as CEOs, heading just 5% percent of S&P 500 companies.

“Women are making incremental progress achieving leadership positions in the C-suite,” said Lorraine Hariton, President & CEO of Catalyst, a nonprofit organization focused on women in the workplace. “However, the fact remains that women CEOs still represent a disproportionately small share of corporate leadership, and women of color aren’t represented at all.”

The 2019 pay figures are from before the coronavirus pandemic upended everything. Hundreds of CEOs have already said they’ll forgo some or all of their salary. And the turmoil in the stock market and the global economy could make it tougher for CEOs to meet performance targets this year.

The analysis of executive pay at companies in the S&P 500 was conducted for the AP by Equilar. The annual review began in 2011. It includes only CEOs who have been in their job for at least two full years, in part to avoid the distortions caused by sign-on bonuses. As a result, a couple CEOs with packages valued even more highly than Su's were excluded.

Su's compensation was more than four times the value of her pay in the prior year. The gain was driven primarily by rewards for performance, including $53 million in stock awards and $3 million in stock options, which vest over several years. Su was paid a base salary of $1 million and a performance-based bonus of $1.2 million.

Since Su took over as president and CEO at the chipmaking company in 2014, its stock has risen from around $3 to about $55, and AMD was the top performing stock in the S&P 500 in both 2018 and 2019. Overall, 2019 was one of AMD’s strongest years, as revenue, profitability and gross margin all improved and the company built up its portfolio of products.

Su’s compensation was $13 million higher than the highest-paid male CEO in the survey, David Zaslav of Discovery. It was more than double the next two highest-paid women CEOs, Marillyn Hewson of Lockheed Martin, whose pay was valued at $24.4 million, and Mary Barra at General Motors Co., with pay valued at $21.3 million.

While culturally, there’s been a recent spotlight on issues facing women in the workplace and increased pressure from stakeholders on companies to create inclusive work cultures, Hariton said structural challenges remain. She said women continue to face entrenched barriers and stall out in middle management.

A total of 20 women were on the list, versus 309 men. For the analysis, executive data firm Equilar looked at companies in the S&P 500 index that filed proxy statements with federal regulators between Jan. 1 and April 30, 2019.

Stock awards can either be time-based, or performance-based, meaning the CEO has to meet certain goals before getting them. To determine what stock and option awards are worth, Equilar uses the value of an award on the day it’s granted, as recorded in the proxy statement. For options, this includes an estimate of what the award could be worth in the future. Their actual value in the future can vary widely from what the company estimates.