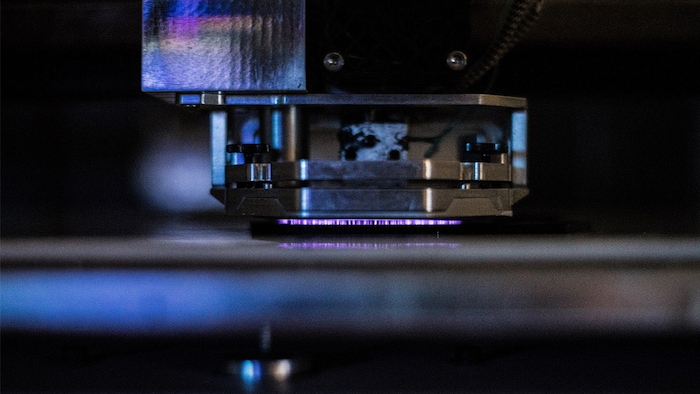 Allowing users to create objects from simple toys to custom prosthetic parts, plastics are a popular 3D printing material. But these printed parts are mechanically weak -- a flaw caused by the imperfect bonding between the individual printed layers that make up the 3D part.

"Finding a way to remedy the inadequate bonding between printed layers has been an ongoing quest in the 3D printing field," said Micah Green, associate professor in the Artie McFerrin Department of Chemical Engineering. "We have now developed a sophisticated technology that can bolster welding between these layers all while printing the 3D part."

Their findings were published in the February issue of the journal Nano Letters.

Plastics are commonly used for extrusion 3D printing, known technically as fused-deposition modeling. In this technique, molten plastic is squeezed out of a nozzle that prints parts layer by layer. As the printed layers cool, they fuse to one another to create the final 3D part.

However, studies show that these layers join imperfectly; printed parts are weaker than identical parts made by injection molding where melted plastics simply assume the shape of a preset mold upon cooling. To join these interfaces more thoroughly, additional heating is required, but heating printed parts using something akin to an oven has a major drawback.

"If you put something in an oven, it's going to heat everything, so a 3D-printed part can warp and melt, losing its shape," Green said. "What we really needed was some way to heat only the interfaces between printed layers and not the whole part."

To promote inter-layer bonding, the team turned to carbon nanotubes. Since these carbon particles heat in response to electrical currents, the researchers coated the surface of each printed layer with these nanomaterials. Similar to the heating effect of microwaves on food, the team found that these carbon nanotube coatings can be heated using electric currents, allowing the printed layers to bond together.

To apply electricity as the object is being printed, the currents must overcome a tiny space of air between the printhead and the 3D part. One option to bridge this air gap is to use metal electrodes that directly touch the printed part, but Green said this contact can introduce inadvertent damage to the part.

The team collaborated with David Staack, associate professor in the J. Mike Walker '66 Department of Mechanical Engineering, to generate a beam of charged air particles, or plasma, that could carry an electrical charge to the surface of the printed part. This technique allowed electric currents to pass through the printed part, heating the nanotubes and welding the layers together.

With the plasma technology and the carbon nanotube-coated thermoplastic material in place, Texas A&M and Essentium researchers added both these components to conventional 3D printers. When the researchers tested the strength of 3D printed parts using their new technology, they found that their strength was comparable to injection-molded parts.

"The holy grail of 3D printing has been to get the strength of the 3D-printed part to match that of a molded part," Green said. "In this study, we have successfully used localized heating to strengthen 3D-printed parts so that their mechanical properties now rival those of molded parts. With our technology, users can now print a custom part, like an individually tailored prosthetic, and this heat-treated part will be much stronger than before."