The Unique Properties of Cicada Wings

Engineers would like to copy their water-repellant and antimicrobial capabilities. 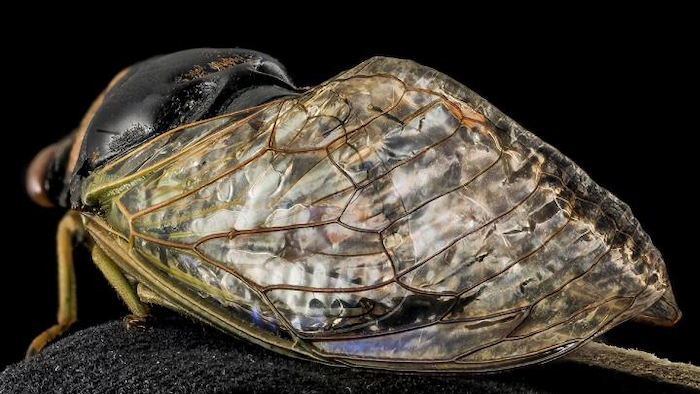 CHAMPAIGN, Ill. -- Biological structures sometimes have unique features that engineers would like to copy. For example, many types of insect wings shed water, kill microbes, reflect light in unusual ways and are self-cleaning. While researchers have dissected the physical characteristics that likely contribute to such traits, a new study reveals that the chemical compounds that coat cicada wings also contribute to their ability to repel water and kill microbes.

The scientists report their findings in the journal Advanced Materials Interfaces.

The researchers looked at the physical traits and chemical characteristics of the wings of two cicada species, Neotibicen pruinosus and Magicicada casinnii. N. pruinosus is an annual cicada; M. casinnii emerges from the soil once every 17 years. Previous studies have shown that both species have a highly ordered pattern of tiny pillars, called nanopillars, on their wings. The nanopillars contribute to the wings' hydrophobicity - they shed water better than a raincoat - and likely play a role in killing microbes that try to attach to the wings.

"We knew a lot about the surface structure of cicada wings before this study, but we knew very little about the chemistry of those structures," said Marianne Alleyne, an entomology professor at the University of Illinois at Urbana-Champaign who led the study with analytical chemist Jessica Román-Kustas, of the Sandia National Laboratories in Albuquerque, New Mexico; Donald Cropek, of the U.S. Army Corps of Engineers' Construction Engineering Research Laboratory; and Nenad Miljkovic, a professor of mechanical science and engineering at Illinois.

To study nanopillar chemistry, Román-Kustas developed a method to gradually extract the compounds on the surface without damaging the overall structure of the wings. She placed each wing in solvent in an enclosed chamber and slowly microwaved each one.

"We extracted all these different compounds over different time periods, and then we analyzed what came off," Román-Kustas said. "And we also looked at the corresponding changes in the nanopillar structure."

"Finding these particular molecules on the surface is not a surprise," Alleyne said. "Hydrocarbons and fatty acids on insect cuticle is fairly common."

The ratio of surface chemicals differed between the two cicada species, as did their nanopillar structures.

The wings of the M. cassinni cicadas had shorter nanopillars and a higher proportion of hydrophobic compounds on their surface. Their nanopillar configuration orientation did not change as a result of extracting their surface chemicals.

While preliminary, the new findings offer insight into the interplay of structure and chemistry in determining function, Alleyne said. By dissecting these characteristics, the researchers hope to one day design artificial structures with some of the same surface traits. Finding materials that shed water and kill microbes, for example, would be useful in many applications, from agriculture to medicine, she said.