Nanoconcrete Can Be Cast at Below-Freezing Temperatures

The concrete mixture with nano-additives allows construction up to 10 stories high. 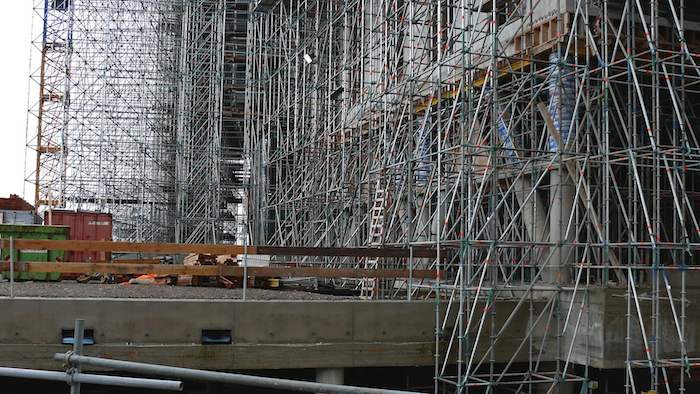 Engineers from Far Eastern Federal University Military training center (FEFU, Vladivostok, Russia), together with colleagues from RUDN University, have developed concrete mixture with nano-additives for monolithic construction up to 10 stories high. The concrete casting is possible within a very humid climate and negative temperature down to minus-5 degrees centigrade. Given that, the constructed buildings will not require major renewal for 50 years. The related article is published in Construction and Building Materials.

Casting concrete under low-temperature conditions is a serious challenge for the construction industry. If the water in the concrete freezes, the fluidity of the concrete can go wrong, which will violate its curing and promote in-slab lumps forming. Casting at temperatures below 5 degrees already requires special technology. Breach of one leads to reduced characteristics of monolithic structures that run down prematurely.

Engineers of the FEFU Military training center (MTC), together with colleagues from RUDN University, suggested introducing into the concrete mix special additives (super plasticizers) whose properties are improved via nanotechnology. The development helps to maintain the strength and durability of concrete structures erected during the cold season — and will not make the construction process more expensive.

"The characteristics of the new nano-mixture meet the needs of civil engineering and generally exceed regulatory requirements. The mixture is suitable for casting of civil structures up to 10 stories high under humid conditions. That makes it relevant for construction in humid continental, monsoon and moderately cold climates. The mixture cures quickly, and the concrete slab has a dense structure with no lumping and with a pore size smaller than in conventional concrete. Thus, moisture, which destroys ordinary concrete, is not capable of penetrating the new one. The properties of concrete slab remain unchanged for 50 years," explained one of the research authors, Roman Fediuk, Lt. Col., professor at the FEFU MTC, the winner of the XIII All-Russian contest "Engineer of the Year 2018."

The scientist continued that the new concrete mixture, like previous developments, contains less cement replaced with ash from energy production and screenings of crushed sand that makes concrete environmentally friendly. Within that, the technological properties of the new mixture are the same as of the mixtures containing high-grade cement, which makes the development more cost-effective.

Engineers found out the proportions of the modified additives empirically; after that, mathematical models refined the calculations. The mixture with a verified composition resists frost and has no increased fluidity at low temperatures in-slab lumping of concrete (segregation) and a decrease in the strength of the cast structure. Moreover, engineers used up to 40% less water in the mixture, and increased the strength and density of concrete slab. High density and gel pore size get achieved not only because of nano-additives but also due to the technology of additional grinding of concrete particles. A grinder was also developed at FEFU.

The new mixture already underwent a test-drive. In field research, engineers built the five-story parking lot. The concrete stone was cured for 28 days under natural conditions with temperature differences from 5 to minus-6 degrees; the result came in accordance with the stated standards.

As additives, scientists used components already well known in the construction industry, the properties of which they improved with nanoparticles. Thus, they have strengthened naphthalene formaldehyde resin by the properties of silicon dioxide, and the resulted concrete turned out to be stronger maintaining operational characteristics longer. Saponified wood resin and sodium nitrate also are the components of the mixture.

A scientific school for the development of intelligent composites for special and civil engineering is run at the FEFU MTC. The main idea of the school is to design artificial materials similar to the natural ones. For example, concrete should have the strength of natural stone. This theory is developing by modern science, Geonics (Geomimetics) established by professor Valery Lesovik of V.G. Shukhov Belgorod State Technological University, a corresponding member of the Russian Academy of Architecture and Construction Sciences. Engineers from Moscow, Kazan, and the Russian Far East are working on the development of the method. The new concrete design is in accordance with the principles of geomimetis, the ultimate goal of which is to design new materials for a comfortable human environment.

At the next stage of research, scientists plan to develop a concrete mixture for casting under negative temperatures down to minus-15 degrees centigrade.