The Coast Guard and a salvage company proposed sawing the Golden Ray into eight enormous chunks. 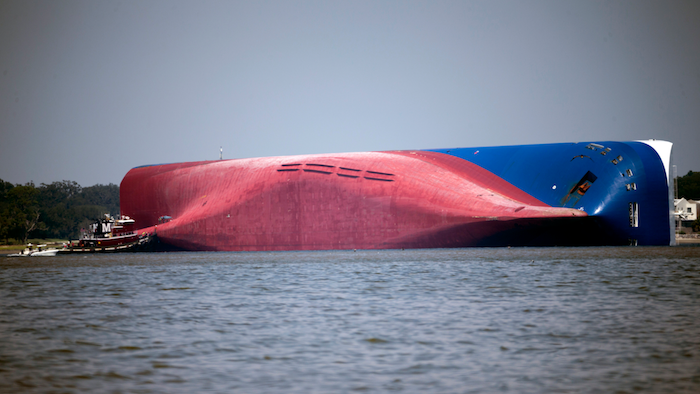 In this Sept. 9, 2019, file photo, a Moran tugboat nears the stern of the capsizing vessel Golden Ray near St. Simons Sound off the coast of Georgia.
AP Photo/Stephen B. Morton, File

SAVANNAH, Ga. (AP) — A federal judge on Friday ordered attorneys for the U.S. Coast Guard and a maritime salvage company to answer detailed questions about plans to remove an overturned cargo ship on the Georgia coast by sawing it into eight enormous chunks.

The salvage firm Donjon-SMIT filed suit Feb. 13 asking the judge to halt removal of the South Korean freighter Golden Ray, which capsized off St. Simons Island on Sept. 8 shortly after leaving the nearby Port of Brunswick with 4,200 automobiles in its cargo decks.

The multi-agency command overseeing the wreck removal hopes to start cutting the ship into sections in May. But Donjon-SMIT says the Coast Guard violated the federal Oil Pollution Act when it allowed the ship's owner to drop the company in favor of a rival salvage firm willing to remove the vessel in larger pieces. Donjon-SMIT's complaint says that plan threatens an “environmental disaster.”

Government attorneys representing the Coast Guard responded Friday that halting salvage efforts already underway “would further delay of the removal of the Golden Ray and increase the risk of harm to the environment.”

U.S. District Court Judge Lisa Godbey Wood has scheduled a hearing Tuesday. Indicating there's no time to waste, Wood submitted 45 questions Friday for attorneys on both sides to answer in writing prior to arriving in court.

“This is no ordinary case,” Wood wrote in her order.

In its legal complaint, Donjon-SMIT said in November it presented a plan to the ship's owner, identified in the court filing as GL NV24 Shipping Inc., to remove the ship in sections weighing approximately 600 tons (544 metric tonnes) to allow systematic removal of the cars inside.

The company said the ship's owner rejected its plan and hired another firm, T&T Salvage, willing to remove the vessel in larger chunks of up to 4,100 tons (3,720 metric tonnes). By allowing the switch, Donjon-SMIT said, the Coast Guard violated the 1990 federal law intended to improve oil spill responses by requiring shipowners to designate salvage responders in advance.

In her Friday order, the judge said she wants to know specifically who made the decision to hire a different salvage company and what “exceptional circumstances” justified the change.

Attorneys for the Coast Guard said in an initial response filed Friday that Cmdr. Norm Witt, the Coast Guard officer supervising the removal, approved the change after consulting with salvage experts in the Coast Guard and the U.S. Navy. They argued the circumstances justifying the switch included the scale of the wreck — the Golden Ray measures 656 feet (200 meters) long — in an environmentally sensitive area where fishing and tourism are vital to the economy.

Witt ultimately approved Texas-based T&T Salvage to remove the wreck in large chunks because “demolition would be faster ... by approximately four months” than Donjon-SMIT had proposed, the Coast Guard's attorneys wrote. They said Witt also concluded the T&T Salvage plan “would better mitigate adverse environmental impacts associated with salvage operations,” in part because fewer cuts to the ship would reduce risks of releasing more pollutants.

The judge also ordered attorneys to provide estimates for the total cost, removal timetables, probabilities for success and worst-case environmental impacts for both Donjon-SMIT's initial proposal and the current plan to carve the ship into larger pieces.

In addition, the judge is asking about the importance of removing the wreck before hurricane season begins Jun. 1.

As for the 4,200 automobiles on board, the multi-agency command said this week it plans to leave them inside the huge sections of the ship that are to be lifted by a giant crane and loaded onto a barge. Though crews plan to wrap open ends of each chunk with a mesh material to contain debris, some vehicles are expected slip through.

“We do expect that some of the cars will end up in the water as part of the cutting process,” said Coast Guard Petty Officer 1st Class Nate Littlejohn, a spokesman for the multi-agency team.

Crews began work this week to surround the Golden Ray with a giant mesh barrier to contain any loose automobiles or other debris. Those will be cleaned up after the larger pieces are removed.