Propylene gas leaked in the piping at Watson Grinding and Manufacturing prior to the explosion. 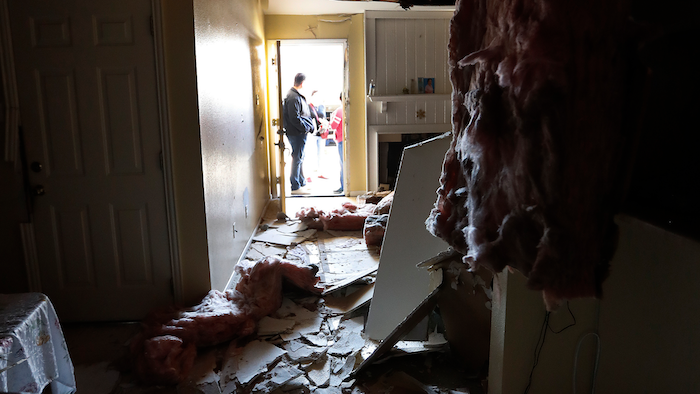 Highly flammable propylene gas started leaking in the piping connected to a tank inside a warehouse at Watson Grinding and Manufacturing within about 24 hours of the predawn blast, said Fred Milanowski, the local special agent in charge for the U.S. Bureau of Alcohol, Tobacco, Firearms and Explosives.

Sensors could have detected a leak, Milanowski said, but it's unclear whether sensors were in place, operating correctly or able to notify the company of a problem.

There is no evidence to indicate arson, vandalism or other criminal wrongdoing behind the Jan. 24 explosion, Milanowski said.

Houston Fire Chief Samuel Pena said the ATF's finding is preliminary, and that determining a final cause could take up to two months.

Company employees Frank Flores and Gerardo Castorena were killed. Two other warehouse workers were injured, along with 18 people from neighboring homes and businesses.

City officials say 450 structures — mostly homes — were damaged in the explosion at the metal fabricating and manufacturing company. Of those homes, 35 were seriously damaged.

City representatives say they are working with nonprofit groups to see what assistance can be offered to residents whose homes were damaged but who might not have the financial resources to repair and rebuild.

John Watson, the CEO of Watson Grinding and Manufacturing, told KTRK-TV on Tuesday: “I will repair all the damaged homes ... My insurance company will.”

However, later Tuesday, Watson issued a statement taking back his earlier comments, saying, “Who is at fault and who will pay for damages cannot be determined at this early stage.”

Mayor Sylvester Turner said this week that the city’s legal department has reached out to Watson to see what it will do to help those whose homes are damaged. The city was also looking at whether any federal assistance might be available.

Volunteers from several community groups have also helped residents with cleanup and repairs.

At least 13 lawsuits have been filed against the company since the explosion, including a wrongful death suit by Flores’ family. Harris County and the state of Texas filed one of the suits, alleging Watson violated the Texas Clean Air Act.

Officials say propylene — a colorless gas used to produce chemicals in plastics, synthetic rubber and gasoline — burned after the blast. The gas was in a 2,000-gallon tank at the facility. People exposed to propylene can become dizzy and light-headed, and the gas can also cause liver damage.

The county and state also allege the company might have failed to properly maintain equipment and properly store chemicals at its facility.

Houston and Southeast Texas are home to the highest concentration of oil refineries in the U.S. The region has experienced a series of explosions in recent years. Last July, a blast at an ExxonMobil refinery in Baytown, east of Houston, left more than a dozen people with minor injuries and put nearby residents under a shelter-in-place advisory for three hours.

In December, two blasts in the coastal city of Port Neches shattered windows and ripped doors from nearby homes.