The Toy Association says the list is needlessly frightening to parents.

The toy industry is dismissing a safety group’s annual worst toys list as misleading and needlessly frightening to parents.

In contrast, the industry trade group says all toys sold in the U.S. must meet more than 100 “rigorous safety tests and standards” by law.

The association represents most of the toy makers named on WATCH’s list. It also suggests parents buy toys from reputable stores and online sellers.

A high-powered Nerf gun, ice cream-scented Nickelodeon slime and a plastic Power Rangers claw are among the toys topping the list released Tuesday by WATCH.

The Massachusetts-based nonprofit has been issuing the lists ahead of the holidays for more than four decades. 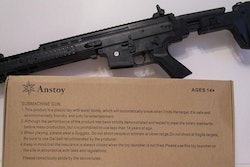