Legislation to reauthorize the agency, which provides loans and other help to foreign buyers of U.S. exports, is dead on arrival in the Senate. 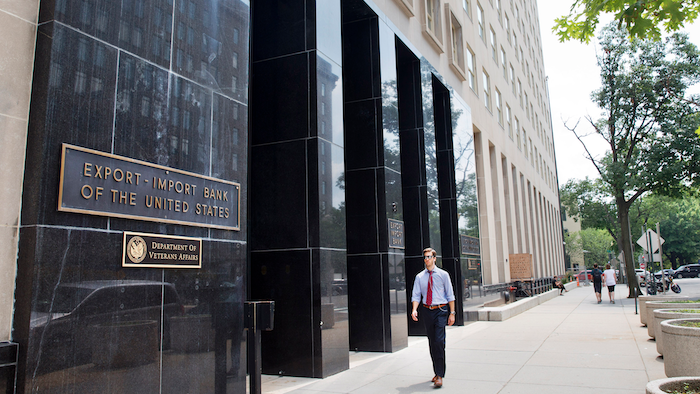 In this July 28, 2015, file photo, a man walks past the Export-Import Bank of the United States in Washington.
AP Photo/Jacquelyn Martin

WASHINGTON (AP) — The Democratic-controlled House is on track to pass a measure renewing the charter of the Export-Import Bank, a U.S. agency that provides loans and other help to foreign buyers of U.S. exports.

But Friday’s vote appears likely to break mostly along party lines and actually promises to be a setback for the bank, which has always enjoyed sweeping bipartisan support.

The White House has issued a veto threat and the legislation is dead on arrival in the GOP-controlled Senate.

Republicans say Financial Services Committee Democrats walked away from a bipartisan agreement that had been struck in advance of a committee vote last month.

“We had a good faith negotiation and the majority decided to walk away ... because of union opposition,” said Rep. Patrick McHenry, R-N.C., the top Republican on the Financial Services Committee, citing the machinists. “They have all their Democrat priorities in there and zero Republican priorities that I negotiated.”

A handful of liberal Democrats also opposed the measure in last month’s committee vote, including Alexandria Ocasio-Cortez, D-N.Y., after their ideas for adding environmental restrictions on financing projects were rejected.

Still, the expected partisan vote on Friday also would reflect the increasingly toxic environment in the House, where impeachment proceedings are dominating attention. Democrats made little effort to reconcile differences in the wake of a marathon committee session last month, leaving legislation that could get a supermajority instead likely to pass only by a small margin.

A 2015 measure reauthorizing the bank won a sweeping bipartisan vote in a GOP-controlled Congress after establishment Republicans prevailed over GOP tea party forces. But the bank languished without a quorum until this spring when the Senate finally confirmed a slate of nominees that allowed the bank to process larger transactions to help companies like Boeing and others with export deals.

It has many GOP critics who say it distorts markets and that too much of its help benefits large corporations like Boeing. Some U.S. businesses, including airlines, say the bank effectively subsidizes foreign competitors.

Among the changes sought by Republicans were provisions to ban the bank from dealing with state-owned enterprises in China and Russia and increased focus on helping small businesses benefit from the bank’s activities.

Supporters of the bank, including most Democrats and the GOP's establishment wing, say foreign governments unfairly subsidize domestic companies and that the bank helps level the playing field.

“If we fail to reauthorize the bank, American businesses will be harmed, and thousands of jobs will be lost,” Waters said, noting that the legislation has the support of both business and labor.

The bank’s charter expired at the end of September but has been temporarily renewed through a government-wide stopgap spending bill and will likely again be extended next week with renewal of the stopgap measure through Dec. 20.