The toll on the British economy is becoming clear. 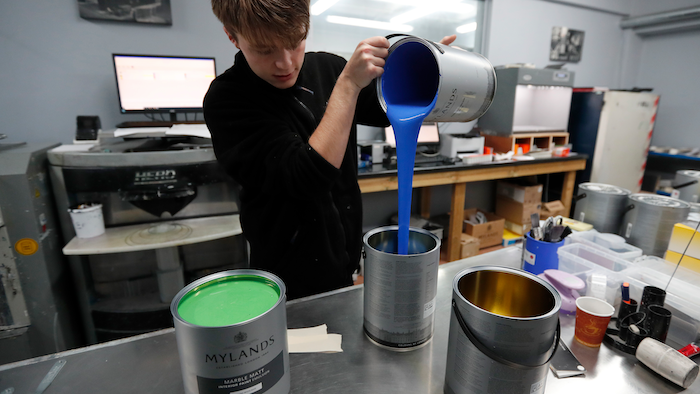 Harvey Myland prepares paint for mixing at the factory in London, Thursday, Oct. 24, 2019. Founded 135 years ago, Mylands paint factory has survived two World Wars, and now supplies film and TV productions such as "Harry Potter'' and "Game of Thrones,'' but Brexit is already reshaping business decisions as they increase storage and moved extra stocks to Germany.

LONDON (AP) — Mylands paint, founded 135 years ago, has survived two World Wars, the Great Depression and the end of the British Empire by adapting its products and practices.

So when it was faced with the economic upheaval threatened by Britain's departure from the European Union, CEO Dominic Myland wasn't going to wait for politicians to resolve the impasse that has kept the nation hanging for three years.

The company, which made the blackout paint that obscured London bridges during World War II and supplies film and TV productions such as "Harry Potter" and "Game of Thrones," has increased stocks of raw materials and moved extra product to a distributor in Germany in case of border checks. If delivery delays become the norm, it may have to set up a whole new company on the continent, Myland said.

"We are very close to opening a depot close to the center of mainland Europe (from) which we can supply a lot of our European customers," Myland said. "That's more of a strategic long-term plan for us anyway, but we may accelerate that process because of the fallout from Brexit if it gets very tricky to export goods."

As politicians squabble over how and when Britain will leave the EU, Brexit is already reshaping the economy. Many businesses have decided they can't wait for a Brexit agreement, which now seems like it could be delayed again. Initially planned for March, it was pushed back to Oct. 31 and now may not happen before January. So companies are shifting investments, creating new supply chains and stockpiling goods to mitigate any damage that would occur from leaving the EU, with or without a deal on trade terms.

The British Chambers of Commerce says Johnson's government has only fully answered five of 36 "business-critical" questions its members must have answered before they can plan for a no-deal exit. Issues where information is still needed include what access British manufacturers will have to European markets, the mechanism for resolving disputes with firms based in the EU and whether companies will be able to move skilled workers between the U.K. and Europe.

That uncertainty is making it difficult to plan. Among small businesses that believe Brexit will affect them, just 21% have prepared for the fallout and 63% say they are unable to prepare, according to a survey by the Federation of Small Businesses released Sept. 27.

"The Brexit clock may appear to stop from time to time, but for firms it keeps ticking," Carolyn Fairbairn, director general of the Confederation of British Industries, said last month. "Until a deal is agreed, companies will continue to divert billions of pounds from productive investment to no-deal preparations, and international investors will continue to question if the U.K. is a stable, open place to do business."

The toll on the British economy is becoming clear.

Investment in the auto industry effectively stopped in the first half of this year as concern about a no-deal Brexit makes it harder for carmakers to respond to changes in the sector like the shift to electric vehicles.

The Society of Motor Manufacturers and Traders says companies made just 90 million pounds ($110 million) of new investments in the six months through June, compared with an average annual total of 2.7 billion pounds ($3.4 billion) over the previous seven years. Car production dropped 20.1% in the first half.

More broadly, 64% of manufacturers say they have taken a financial hit during the past two years as they struggle to prepare for an unknown trading environment after Brexit, according to research published last week by Make U.K., a manufacturers' organization, and the law firm Squire Patton Boggs.

Brexit uncertainty also appears to be damping enthusiasm for corporate deals, with a significant slowdown in initial public offerings and acquisitions this year, the law firm Baker McKenzie said in a report last week.

If Britain leaves the EU without a deal, cross-border shipments could become subject to tariffs, as well as border checks and other disruptions that don't currently exist for trade between EU member states.

"We have already seen major companies voting with their feet and taking their planned business operations away from the U.K. while many businesses are losing out on new contracts with EU customers because of the uncertain future trading arrangements," said Stephen Phipson, CEO of Make U.K. "This is only going to get worse until a deal with a sensible transition period is agreed."

Mylands, which makes a unique luxury paint that contains crushed marble, is among the companies trying to prepare. But that costs money.

The expense of keeping more raw materials on hand has affected cash flow and that's magnified by the weaker currency, Dominic Myland said. The pound is down about 15% against the dollar and the euro since the 2016 referendum in which voters decided to leave the EU.

"Fifty or sixty percent of everything we buy comes via the European Union, whether it's brokered in Europe or manufactured in Europe," he said. On top of the currency effect, the cost of sourcing goods has risen globally. "Effectively, the cost of buying raw materials since 2016 has increased by about 24-25%."

His regional distributor in Germany's southern region of Bavaria is also trying to keep up.

"We are quite active right now and (trying) to get a grip on it, but unfortunately this changes sometimes three times a day," says Astrid Reintjes, manager the company, called Miss Pompadour. "In the morning you may think 'OK, everything is going well', and in the afternoon the news is completely different again."

Many businesses are either unable or unwilling to invest in contingency planning until they get clarity on the long-term relationship between the EU and Britain, said Claudia Catelin, analyst for the Institute of Directors, which represents top company officials.

"This is because they are mostly small and medium-sized businesses that don't necessarily have the capacity to plan for a no-deal that they don't know for certain will happen," she said.

Despite the financial burdens, Myland is confident his company, which was founded by his great-grandfather in 1884, will get through Brexit and remain a proud British company.

A world shaped by Brexit is all that his 19-year-old son, Harvey, will know as he prepares for a role in management.

The 19-year-old is working on the factory shop floor in south London, learning how to mix lustrous paints that bear the names of iconic locations around the capital: Bond Street. Belgravia. Sloane Square.

As Harvey watches a mixer stir a vat of cobalt blue, he says there is no option but to be ready and meticulous — whether preparing paint or planning for events like Brexit.

"Color-making can be stressful," he said. "You have got to get everything spot on."