Mexico's Senate has ratified the agreement, but U.S. lawmakers have yet to do so. 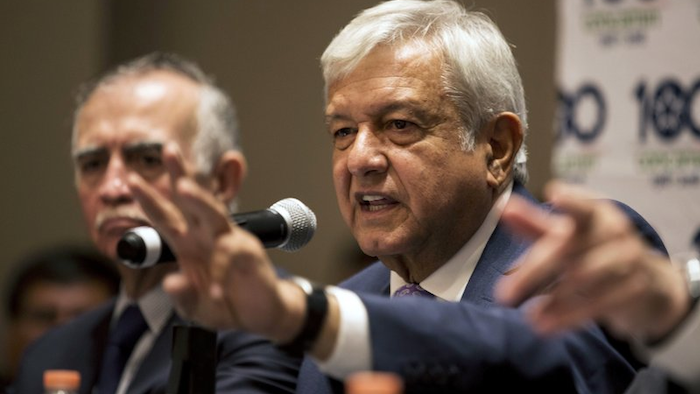 MEXICO CITY (AP) — President Andrés Manuel López Obrador and other top officials met Tuesday in Mexico City with a U.S. congressional delegation to lobby for U.S. approval of a pending trade agreement between the two countries and Canada.

López Obrador said he expressed the same sentiment in a letter he gave the delegation to deliver to House Speaker Nancy Pelosi. It asks, he said, "respectfully, for a timely approval to be achieved so that this important matter ... to favor the economy of the three countries is not mixed up with and contaminated by" the politics of the 2020 election.

López Obrador posted a photo of him posing with Democratic Reps. Richard Neal, Jimmy Gomez, Bill Pascrell, Jimmy Panetta and Dan Kildee. All sit on the key House Committee on Ways and Means, with Neal as chair.

The USMCA treaty was negotiated as a replacement for the North American Free Trade Agreement, which U.S. President Donald Trump campaigned on renegotiating or scrapping altogether.

Mexico's Senate has ratified the agreement, but U.S. lawmakers have yet to do so.

Mexican Foreign Relations Secretary Marcelo Ebrard, who took part in the meeting, said the U.S. lawmakers expressed a desire to get to ratification but had questions such as about how Mexico will implement labor reform.

López Obrador told the delegation that improving wages and labor conditions in Mexico is a crucial goal of his administration, independent of the USMCA, and that "Mexico will no longer sustain its development on low salaries," according to Ebrard's account of the exchange.

"I would be reasonably optimistic about the results of this meeting," Ebrard said.

Recently arrived U.S. Ambassador Christopher Landau, who was also present, tweeted that "free and fair trade benefits us all."