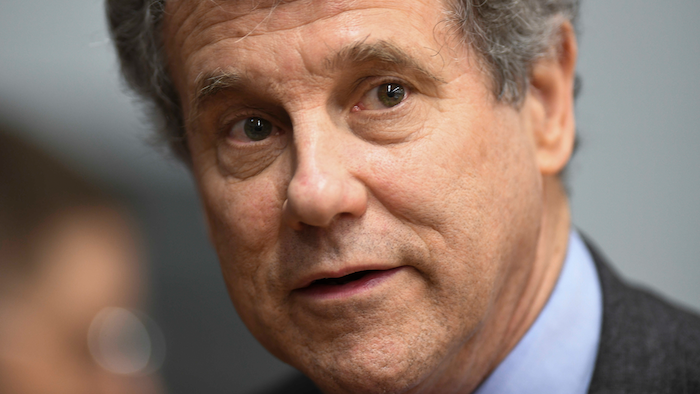 In this March 3, 2019 file photo, Sen. Sherrod Brown, D-Ohio, speaks to reporters during the Martin Luther and Coretta Scott King Unity Breakfast in Selma, Ala. Brown is rolling out a proposal that would force employers to warn workers and retrain them when their jobs are about to be eliminated by automation.
AP Photo/Julie Bennett, File

TOLEDO, Ohio (AP) — Democrat Sherrod Brown is pushing his party's 2020 hopefuls to talk more about "pro-worker" issues, saying it's a sure way to beat President Donald Trump next year.

The U.S. senator from Ohio, who earlier this year decided against a White House run, is trying to kickstart the conversation with a proposal that would force companies to help workers whose jobs are replaced by automation.

The legislation, which Brown plans to introduce this week, calls for employers to retrain workers and pay them severance when their jobs are eliminated by new technology.

Brown has spent the last few weeks touting the plan, but he said there's little chance of getting it through the Republican-controlled Senate and the Trump administration.

What he wants is to get people talking about how workers are being treated in a fast-evolving economy with the hope of turning his idea into law if Democrats take control in Washington in next year's election.

"It should be a major topic of discussion for our whole country," he said. "Government has to anticipate this stuff better than we have."

Known for his progressive populism, Brown visited early-voting states on his "dignity of work" tour at the beginning of the year while mulling a presidential bid.

Brown said he still isn't hearing Democrats talk enough about policies that would benefit workers. But he said he's certain they can win if they draw a contrast with Trump on that front.

"The Democrats will undoubtedly win this election against Trump if they talk more about the dignity of work, honoring and respecting work and issues like this," he said.

The legislation Brown is proposing would force businesses with more than 25 workers to pay employees a six-month severance and give them a nine-month notice when their jobs are being eliminated by technology.

There also would be a requirement to retrain employees whose jobs are eliminated.

Brown, who spoke to labor leaders in Toledo at a United Auto Workers hall, said automation is inevitable in manufacturing, but he wants to make sure workers aren't forgotten.

Marlaina McNair, who works on the assembly line building Jeeps in Toledo, said she knows there's a chance that automation will change her job.

"You can't stop it. Technology is rapidly evolving," she said. "We just need the training to adapt."