Clear hive will allow students to observe the secret life of bees. 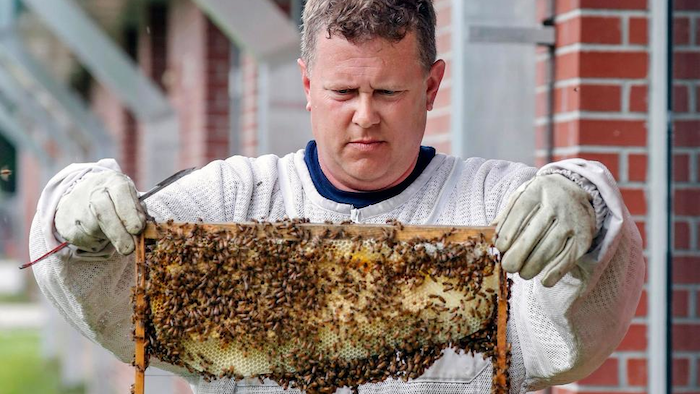 In this Aug. 5. 2019 photo, beekeeper Jonathan Beale, looks over a comb as he relocates bees to an indoor observation hive in a classroom at Combee Academy of Design and Engineering in Lakeland, Fla.
Pierre DuCharme/The Ledger via AP

LAKELAND, Fla. (AP) — Beekeeper and Lakeland firefighter Jonathan Beale carefully transferred four wooden frames from a beehive into a tall, slender glass bee box this week and installed the clear hive in a classroom at Combee Academy of Design & Engineering so students can observe the secret life of bees.

"We are so excited about this," Principal Tammy Farrens said as she watched the bees work inside the hexagon shapes comprising the honeycombs. Eggs could be seen inside the wax configurations, some of the 2,000 a day a queen can lay in summer.

Tracy Miller, a Science Technology Engineering and Math teacher resource specialist, spearheaded the hive project and stayed busy tightening screws on the hive. The quiet hum of the bees was barely audible as Miller then slid a metal panel out from a small, rectangular tube that connects the hive to the outside world. The bees that hadn't transferred into the hive with the frames could then smell their queen and began entering the glass hive through the rectangular tube, which has a glass panel for viewing.

Miller applied for a $1,500 grant from the Whole Kids Foundation as part of the Bee Cause Project to pay for the hive. She explained that it has been an 18-month process to apply for the grant, give a presentation to the school district, get approval from the school district, undergo training and find Beale as a mentor.

"Thirteen staff members went to a honeybee seminar — we learned a lot we didn't know," Miller said. "They don't like black — their instinct is it's a predator, like a bear — or cloudy weather. They don't sting you when they're swarming because their function is not to protect the hive, it's to protect the queen."

The guidelines called for the hive to be installed on a south-facing wall, away from sidewalks, playgrounds or places with a lot of foot traffic. She said maintenance crews can mow the grass outside of the classroom as normal, but they can't stop the mower near the hive so the vibration doesn't upset the bees.

Beale said he got into beekeeping because he had a garden, but wasn't getting any squash because his plants had not been pollinated.

"I looked into bees and I got 'stung' by the bee bug," Beale joked. He pointed out that the bees' most important function is as pollinators. Without that act, a plant or tree won't produce fruits or vegetables for humans to eat.

"Their food source is disappearing," he said, noting that there is substantially less acreage of wildflowers and citrus groves in Florida than there was just half a decade ago.

Brody Sims, 10, walked into the STEM classroom to see his new "classmates."

"I think there's at least a thousand in there," said Brody, who has something in common with the bees — he likes to build things, too. "I think it's cool."

Miller and Farrens said a letter will be going home this week to explain the bee box and to encourage any questions parents might have. For any students possibly allergic to a bee sting, Farrens said it would be handled like any medical emergency, with the use of an EPI pen and a call to 911.

Maintaining the health of the hive is also important. Students will be assigned throughout the school year to monitor the hive for invasive pests like the wax moth and the varroa mite, which attacks and feeds on honey bees. And Beale will be making monthly visits to the classroom to check on the hive.

As for the sweet byproduct of bee study, Miller said they won't be harvesting the honey unless there is a swarm and all the bees leave the hive.