Dolphin Drilling, the parent company of Harland and Wolff, failed to find a buyer for the embattled Belfast shipyard. 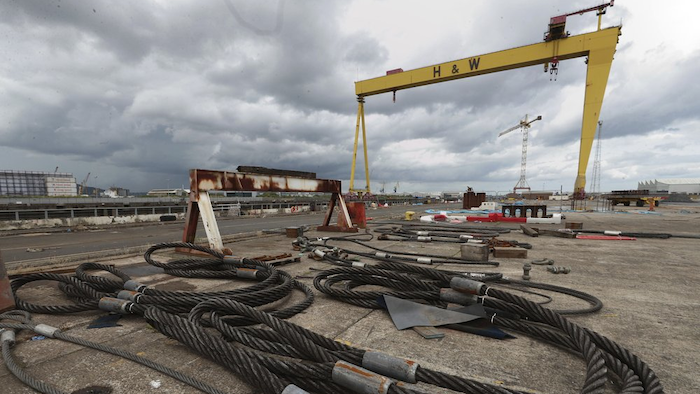 Cables strewn over the ground in front of the Samson Crane at the Harland and Wolff shipyard after workers voted to continue their occupation of the shipyard, Belfast, Northern Ireland, Monday, Aug. 5, 2019.
Liam McBurney/PA via AP

LONDON (AP) — Belfast-based consultancy BDO Northern Ireland Partners says it will oversee the administration of the shipyard that built the Titanic after the firm ran out of money.

Harland and Wolff appointed BDO as administrators after its Norwegian parent company, Dolphin Drilling, failed to find a buyer following its insolvency.

The Belfast shipyard was best known for constructing the doomed White Star liner that sank in 1912 after hitting an iceberg. It once boasted a workforce of 30,000, but now employs about 125, though it supported hundreds of other jobs in its supply chain.

In recent years, it has worked on wind energy and marine engineering projects.

BDO said Tuesday it is engaging immediately with employees and stakeholders "to take all necessary steps to ensure they are supported throughout the administration process."