The lawsuit found that Monsanto's Roundup herbicide caused cancer in a California couple. The judge cut the award from $2.055 billion to $87 million. 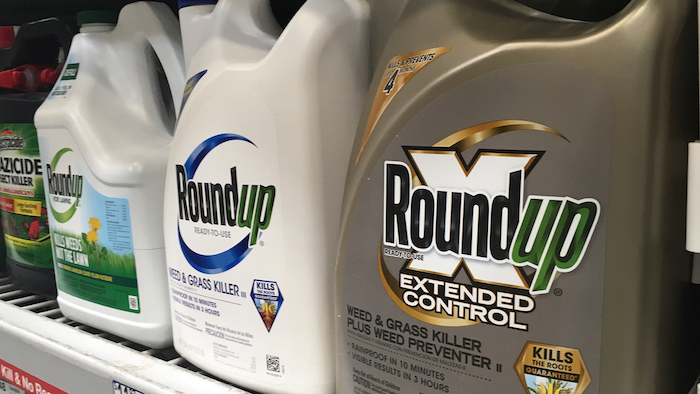 In this Feb. 24, 2019, file photo, containers of Roundup are displayed on a store shelf in San Francisco. A Northern California judge has upheld a jury's verdict that Monsanto's Roundup herbicide caused cancer in a couple but reduced damages from $2 billion to $86.7 million.
AP Photo/Haven Daley, File

The judge said Thursday that evidence supports the jury's conclusion that Roundup was "a substantial factor" in causing non-Hodgkin's lymphoma in Alva and Alberta Pilliod, the San Francisco Chronicle reported.

But Smith said the punitive damages were much higher than constitutional limits set by the U.S. Supreme Court, which has said should generally be no more than four times the amount of damages awarded as compensation to victims.

A jury in May awarded the Pilliod's $1 billion each in punitive damages in addition to a combined $55 million in compensatory damages.

Smith reduced punitive damages to $70 million. She also reduced the compensatory money the jury awarded to the couple for past and future pain and suffering to $17 million.

The couple had anticipated the reduction, and their lawyer said the overall ruling was "a major victory."

Although "the reduction in damages does not fairly capture the pain and suffering experienced by Alva and Alberta," attorney Brent Wisner said in a statement, "the judge rejected every argument Monsanto raised and sustained a very substantial verdict."

The reduction in damages is "a step in the right direction," the company said in a statement, but the verdict and damages "conflict with the extensive body of reliable science and conclusions of leading health regulators worldwide" that both Roundup and glyphosate are safe.

Alva Pilliod, 77, was diagnosed with non-Hodgkin's lymphoma, a sometimes-fatal form of lymph cancer, in 2011, and Alberta Pilliod, 74, was diagnosed in 2015. They had used Roundup for more than 30 years to kill weeds on three properties they owned. Doctors say their cancers are in remission but could recur.

Last August, a San Francisco jury awarded $289 million to former school groundskeeper Dewayne Johnson of Vallejo. A judge later reduced the award to $78.5 million. In March, a federal court jury awarded more than $80 million to Edwin Hardeman of Sonoma County, whose cancer is in remission. A judge reduced that award to $25.2 million.

The three California trials were the first involving an estimated 13,000 plaintiffs with pending lawsuits against Monsanto.

The International Agency for Research on Cancer, an arm of the World Health Organization, classified glyphosate as a probable cause of human cancer in 2015. The U.S. Environmental Protection Agency and most regulatory bodies in Europe say it can be used safely.