The company backed by Elon Musk has been awarded a nearly $49 million contract to build a system using self-driving vehicles underneath the Las Vegas Convention Center. 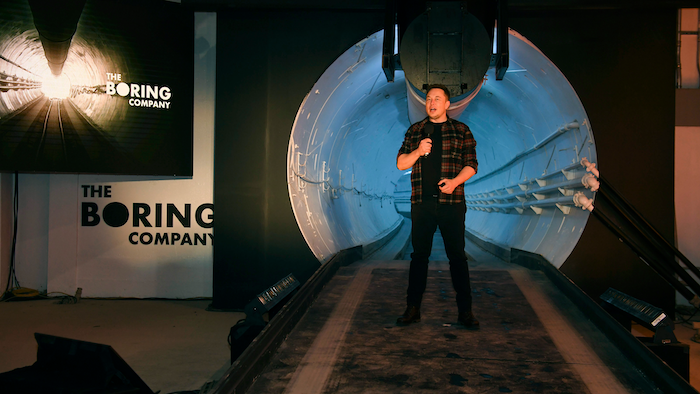 A company backed by tech billionaire Elon Musk has been awarded a nearly $49 million contract to build a transit system using self-driving vehicles underneath the Las Vegas Convention Center.

The board of directors of the Las Vegas Convention and Visitors Authority approved the contract Wednesday with The Boring Company, the Musk-backed enterprise based in Hawthorne, California.

People would be transported underground on self-driving electric vehicles from three types of Tesla Model X chassis. The system will be capable of transporting up to 16 people at time through parallel tunnels, each running in a single direction. The twin tunnel system will run less than a mile (1.6 kilometer) long.

The system also will include a pedestrian tunnel and three underground stations accessible from convention center's halls.

The company plans to immediately pursue permits to start construction in September. It aims to debut the system by December 2020.

"The first thing that's important is to get it right," Authority President and CEO Steve Hill told the Las Vegas Review-Journal . "We want to do it as quickly as possible, but we want our customers to be comfortable with it."

Las Vegas Mayor Carolyn Goodman cast the only vote against the project. At a meeting last week, she cited concerns about hiring a company that has yet to deliver a transit system.

The authority will reimburse the company as it completes certain stages of the project, like completing excavation for the first station and digging the first 100 feet (30.5 meters) of the first tunnel. Full payment is contingent on the company demonstrating that the system can support an average of 4,400 passengers per hour.

Construction will be able to proceed without disruption to traffic or other surface activity, Hill said. The system also could be expanded, which could be part of the solution to the city's transportation problems, he said.