The VEX Robotics World Championship, held in Louisville for the fifth time, featured more than 15,000 students from some 40 countries. 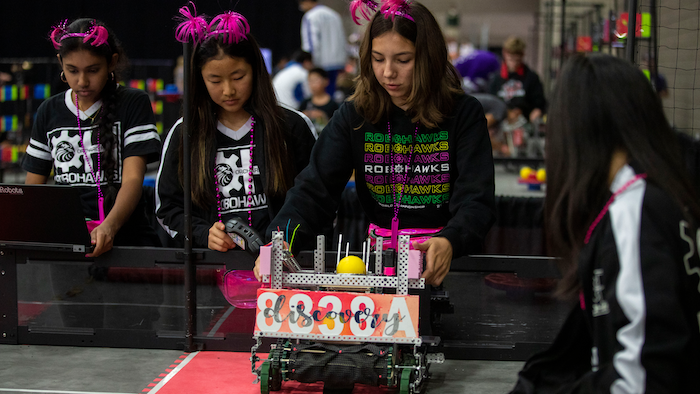 More than 15,000 students from about 40 countries brought robots they've spent months building and fine-tuning to Louisville recently for a world championship designed to spark their interest in pursuing careers in fields such as engineering and technology.

These students, who span in grades from elementary school through college, are part of around 1,650 teams that have excelled in competitions held across the globe, culminating in the VEX Robotics World Championship.

This competition was sponsored by VEX Robotics, which makes hands-on educational tools teachers can use in their classes, and was being held in Louisville for the fifth time.

The championship, which Guinness World Records has recognized as the largest robotics competition, brought more than 25,000 people to town, including students, coaches and parents.

And it gave kids the chance to get to know peers from other countries as they compete to win trophies (and bragging rights) while expanding their knowledge of computer programming and other subjects, according to the event's organizers.

"It takes you from your zone of comfort to another level," said Alonso Montagut, a teenager from Gimnasio Campestre San Sebastian, a school in Bucaramanga, Colombia.

Plus, it gives him a chance to learn base skills that will be useful when he achieves his goal of working in nanotechnology.

For his teammate, Guillermo Machado, robotics is more of a hobby than a gateway to a science or technology career.

However, his mother, Judit Ferreira, said Colombia needs teens to spend their free time in productive ways like this.

She also noted that Colombia has a growing need to get more people working in fields of science, technology, engineering and math (often referred to collectively as STEM), as does Kentucky and many other states and countries.

"We're trying to inspire kids to pursue STEM careers through robotics," said Dan Mantz, CEO of the Robotics Education and Competition (REC) Foundation, a nonprofit that organizes the championship. "Workforce development is so important right now."

Expanding the number of workers who are ready and able to enter STEM fields is a big goal for Kentucky's state government.

Gov. Matt Bevin often says he wants Kentucky to become a hub of excellence for advanced manufacturing, and the commonwealth's public universities are working to increase the number of STEM degrees they award each year.

Michael Noonan, who is supervising a team of students that came to Louisville from London, said the United Kingdom is experiencing a big shortfall in STEM graduates, too.

To address that gap, he said the VEX Robotics competitions and similar programs open up new opportunities in careers like engineering for bright students. "It's getting them more skilled earlier (and) more interested earlier," he explained.

From an educational and a workforce development standpoint, Mantz indicated that it's important to encourage more girls to study science, engineering and other technical subjects and ensure they aren't discouraged from pursuing careers in those fields, which have traditionally been male dominated.

The foundation and VEX Robotics' Girl Powered initiative seeks to help students gain confidence in their skills and encourage them to envision a future for themselves in STEM careers, in part by giving them an opportunity to hear from women succeeding in those realms.

And it's already getting results. Over the last three years, the level of participation by girls in the VEX Robotics program rose from 23% to about 37% overall, Mantz said. At the elementary school level, 47% of the participants are girls now.

Rebecca Harris and Hannah Master, two teenagers from Pennsylvania, competed in the VEX Robotics World Championship in Louisville as part of an all-girl team, and they say they've seen more girls getting involved in the competition each year.

"We've had so many young girls come up to us and ask us, 'How does your robot work?'" said Harris, who is 18. And being able to inspire other students like that has been encouraging for them on a personal level.

Harris plans to pursue a career in industrial design, which melds her longtime love of art with her interest in engineering. Meanwhile, Hannah, 17, said she's gained valuable skills in creative problem solving.

Teaching students how to solve problems and collaborate with their peers is an important part of what VEX Robotics competitions are all about, Mantz said.

"We actually believe in failing," he explained, because that's how people learn to problem solve.

Students who competed as members of Meyzeek Middle School's Meyzeek Bear Bots team described the work they've put into their robot as a process that involved a lot of collaborative trial and error.

Vicky Johnston, who coaches the Bear Bots, emphasized the value of the steadfast commitment her students have developed when it comes to finding fixes for the issues that continually pop up when they're prepping for and participating in competitions like this.