The Mayan Train through Mexico's Yucatan is moving forward at a pace that could threaten its feasibility, the environment and the people it is intended to help. 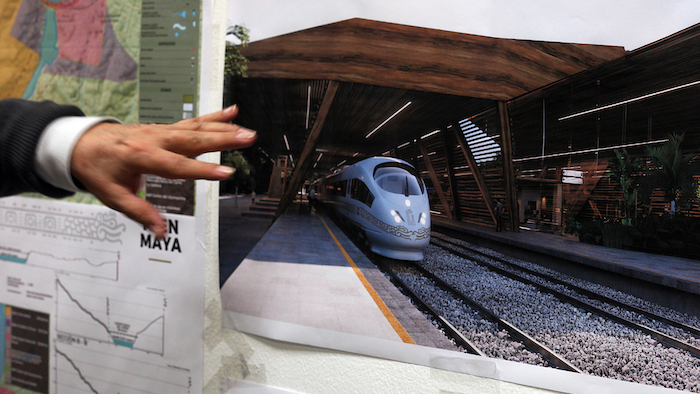 Rogelio Jiménez Pons, director of Fonatur, points to photos of a planned train through the Yucatan Peninsula during an interview in Mexico City, Monday, March 18, 2019.
AP Photo/Marco Ugarte

Maps, renderings and charts paper the walls of a government conference room. They lay out in detail the plans for a rail line that could be Mexico's biggest infrastructure project in a century.

President Andrés Manuel López Obrador has put the multibillion-dollar Mayan Train project on a fast track. He says it will provide an economic boon for the poor communities of Mexico's long neglected southeast by bringing in more tourists and the hotels, restaurants and other businesses needed to serve them.

Yet, among the papers on that wall at Mexico's tourism development agency is a chart showing that the Mayan Train is being pursued at a pace that outside observers say could threaten its feasibility, the environment and the people the president wants to help.

The chart in the Fonatur offices outlines planning, contracting and building times for 45 recent train projects in Canada, Australia, Britain and France. Those projects, which do not approach the Mayan Train's length, averaged seven to 10 years to complete.

And there's the rub: López Obrador is limited to a single six-year term and wants the trains running before he leaves office Dec. 1, 2024. The chart says the nearly 950 miles (1,525 kilometers) of the Mayan Train will be finished in 4.8 years, with nearly all of the time savings coming from the planning and contracting phases.

"Yes, we've skipped some steps, but we are forced to by the circumstances of the political terms," said Rogelio Jiménez Pons, director of Fonatur who says government planners are also working with international experts and the United Nations. "It's a six-year term, so if you don't get at least a year of operation for the project it's at serious risk."

López Obrador himself underlined that point by making one of his first presidential acts the cancelling of a partially built $13 billion new airport for Mexico City that was begun by his predecessor.

The Mayan Train would circle the Yucatan Peninsula and drop a spur south to near the border with Guatemala. It would serve tourists and workers at Cancun and the glistening resorts of the Riviera Maya, but also haul cargo.

López Obrador says the project will fulfill his dream of helping the people of the southeast and will display a new brand of inclusive development and respect for the environment. "Not a single tree will be felled," the president has said — a promise that strains credulity for a project that is intended to travel through jungle, even if it is along existing right of way.

An immediate question for many is whether planning and executing a megaproject can really be carried out so quickly. And what about its projected cost of $6.3 billion to $7.9 billion (120 billion to 150 billion pesos)?

The Mexican Institute for Competitiveness, a public policy think tank, published a study last month predicting the cost would come in at four times that — $25.3 billion (480 billion pesos).

Its report also urged not to rush the project without careful planning.

"There aren't serious cost-benefit analysis studies, nor a study about demand, nor a serious study of bids that will really have a projection of this train," said Ana Thaís Martínez, a researcher who wrote the study.

She also noted that Mexico's other recent rail project, a 36-mile (58-kilometer) commuter line between Mexico City and Toluca, is already 90% over its initial $2 billion budget and remains unfinished after more than six years of construction. It was supposed to be completed by 2017.

Jiménez Pons, the Mayan Train's point man, said the government will pay only about 10% of the project's cost, while the private sector picks up the rest through what will essentially be costly contracts to operate the train service. Development around each of the line's 15 proposed stations would be overseen by Fonatur, but by using real estate investment trusts the land would remain in the hands of property owners, essentially making them partners.

The train's cargo hauling service is to be its most important source of revenue, while passenger ticket prices are expected to be subsidized, Jiménez Pons said. Martinez's report noted that running passenger and freight trains on the same line is complicated, and it suggested the government's expectations for cargo revenue could be overly optimistic.

There are also concerns about the environmental impact. New track would be laid through the Calakmul Biosphere Reserve, a UNESCO-recognized area of wide biological diversity that is Mexico's largest tropical jungle and home to important pre-Hispanic archaeological ruins. And the region is perforated by underground rivers and caverns.

A Fonatur presentation based on a preliminary environmental study in the state of Campeche obtained by The Associated Press highlighted potential "critical impacts" on wildlife during construction of track, stations and associated tourism infrastructure. Some effects could be mitigated, but they would require careful study, it said.

So far, people in the areas that would be affected say they have received little information about the project and its impact, even as land speculation surges around them. Jiménez Pons promises that all of the required environmental impact studies and public consultations with indigenous communities will be completed.

Jiménez Pons has known López Obrador for decades and says the president has been thinking about this train for many years as a way to benefit the southeast.

"This isn't a whim, an imposition or because Mexico's president is from the southeast," López Obrador said in December at an indigenous ceremony in Palenque where he sought Mother Earth's blessing for the project. "Above all it's an act of justice, because it's been the most abandoned region, and now the southeast's hour has arrived."

Einar Jesús Medina Borges has been shuttling tourists around the colonial gem of Merida in a horse-drawn carriage since he was a teenager. The train sounds good to Medina, who heads the local carriage drivers' union, because it could bring more tourists to his inland city. Still, he has concerns.

Another concern is not so much the train itself, but the tourist infrastructure that would be developed around proposed stations, especially one that would serve the Calakmul reserve. If government projections prove true, bringing 3 million annual visitors to an area that has only about 30,000 residents today would be a mammoth change.

"The project has major ecological implications and the design has to change and the magnitude has to change so nothing serious happens," said Jorge Benítez, an ecologist who has studied the reserve for years and published a paper on the potential impact of the train. He has joined a technical advisory board to the project and says officials have so far been receptive to his concerns and have even heeded calls to include the construction of wildlife corridors over the rail line.

Jiménez Pons said environmental impact statements are beginning for areas, including Calakmul, where there are no existing railways — about half the proposed route. But the time pressure looms.

"We're racing the clock, but it's possible," he said.