The suit seeks financial penalties and a ban on the amphibious vehicle tours after the July 19 accident on Table Rock Lake near Branson. 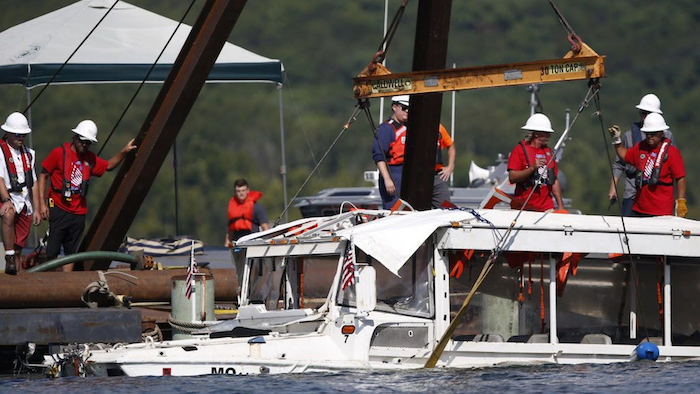 The operators of a Missouri duck boat that sank in July, killing 17 people, say in a court filing that a lawsuit from Missouri's attorney general is "irresponsible" and "littered with factual inaccuracies and innuendo."

Attorneys for the companies on Monday asked a judge to dismiss the lawsuit.

Hawley spokeswoman Mary Compton said in a statement that the attorney general's office stands by the allegations, calling the rebuttal "a frivolous attempt ... to evade responsibility for the deaths of 17 people."

Ride the Ducks of Branson offered tours that began on land before entering the lake for a ride. Video and audio recovered from the doomed boat showed the lake was calm when the boat went into the water but winds up to 70 mph (113 kph) began blowing suddenly as a fast-moving storm approached. The boat, carrying 31 people, sank within minutes.

The lawsuit from Hawley, who is a Republican candidate for U.S. Senate, alleges employees had told the driver of the duck boat to skip the land-based section of the tour and head directly to the lake to avoid giving refunds, "even though potentially hazardous conditions were forecasted for the area."

In the rebuttal, attorneys for the companies denied customers were put on the water when it was clear that danger was imminent.

"These and many other of the Attorney General's assertions and insinuations are not only wrong, but entirely irresponsible," the court filing said.

The filing said the boat had passed U.S. Coast Guard inspection and the captain had an "extended track record of safety." It noted that the captain headed for shore within 17 seconds after whitecaps appeared on the water and wind increased.

"The Attorney General's suggestion that BDV and Ripley flouted safety concerns in the name of profits is nothing more than baseless hyperbole, aimed at leveraging and stoking passions in the aftermath of this tragedy in an effort to polish the Attorney General's prosecutorial credentials," the rebuttal stated.

Ripley Entertainment said in a statement to the media on Tuesday that the company isn't seeking to avoid responsibility, but believes the case "falls under the regulation of the U.S. Coast Guard, and not the Missouri Attorney General."

The Coast Guard last month made public the ill-fated boat's certificate of inspection, which prohibited it from being on the water when winds exceeded 35 mph (56 kph) or wave heights exceeded 2 feet (0.61 meters).

Several lawsuits also have been filed on behalf of victims and their families, and federal prosecutors are conducting a criminal investigation.