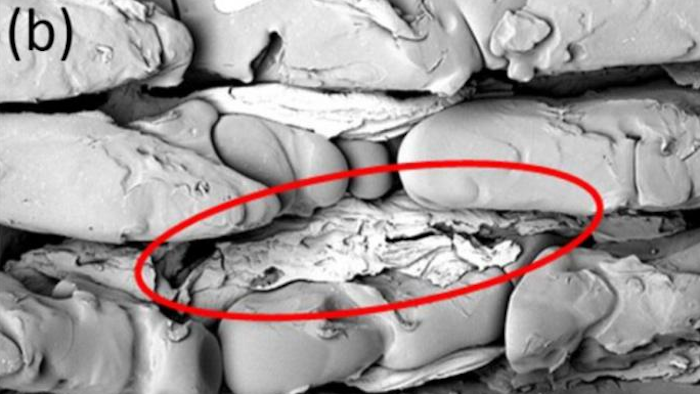 Aluminum in the trenches of the molded polymer surface after tensile shear test.
Matthieu Fischer

A technique of applying lasers to aluminum sheets helped the metal bond more strongly with polymers in an injection molding process, according to a recently published study.

Although the German researchers behind the analysis cautioned that more work needs to be done, the method could potentially pave the way toward more practical metal-plastic hybrid materials.

Currently, such hybrids must be carefully — and expensively — joined together, which hinders industry adoption despite demand for strong, lightweight materials, particularly in the automotive and aerospace sectors.

Scientists from German research institutes and universities pretreated some aluminum sheets with a continuous laser and other sheets with a laser pulsing for 20 picoseconds. The sheets were then overmolded with thermoplastic polyamide in an injection mold.

Subsequent tests then determined that the roughened sheets produced by the pulsing laser “enjoyed much smoother line patterns in the trenches on their surfaces than those pretreated with continuous laser radiation.”

Scientists said they next want to determine how molded thermoplastics shrink as they cool.

"The thermal contraction leads to mechanical stresses and can separate both parts,” said Jana Gebauer, an author of the study published in the Journal of Laser Applications. “The current challenge is to generate a structure that compensates for the stresses during shrinkage without softening the aluminum by the laser treatment.”