The Jalisco New Generation Cartel and the Sinaloa Cartel are using bitcoin to avoid money-laundering controls. 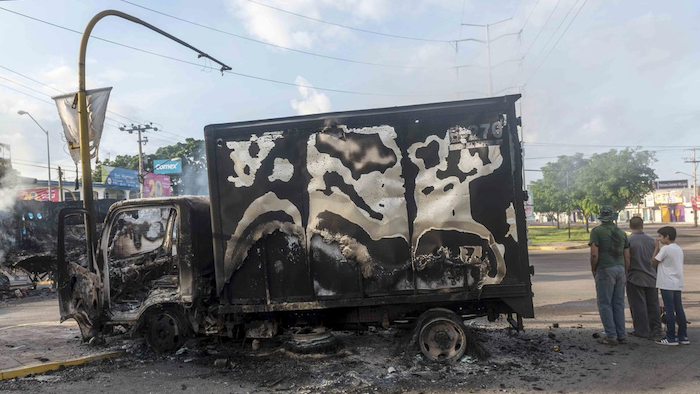 A burnt out truck after street battles between gunmen and security forces in Culiacan, Mexico, Oct. 18, 2019.
AP Photo/Augusto Zurita

MEXICO CITY (AP) — Drug cartels in Mexico are increasingly turning to the internet, bitcoin and e-commerce to launder money and sell drugs, according to a report released Thursday by the United Nations Office on Drugs and Crime.

The report of the International Narcotics Control Board said Thursday the Jalisco New Generation Cartel and the Sinaloa Cartel are increasingly using small, online purchases of bitcoin to avoid money-laundering controls.

The report said Mexican cartels are believed to launder about $25 billion a year in Mexico.

After splitting drug proceeds into small payments to avoid controls, the cartels “then use those accounts to buy a series of small amounts of bitcoin online, obscuring the origin of the money and allowing them to pay associates elsewhere in the world.”

The report said “both Mexican and Colombian organized criminal groups are increasing their use of virtual currency because of the anonymity and speed of transactions.”

The report also said “online vendors ... have a significant impact” in selling drugs. Web sites often advertise fentanyl-laced pills as Xanax, Adderall or Oxycodone, and Raúl Martin del Campo, a member of the Control Board, said “the majority of people do not know they are using fentanyl.”

Del Campo also said drug cartels are also reviving old recipes for synthetic narcotics that had fallen into disuse because of their side effects.