How Technology Is Helping Miami Rescuers in Tower Collapse

Search teams have been using drones, sonar, sensitive microphones and other new and established technologies. 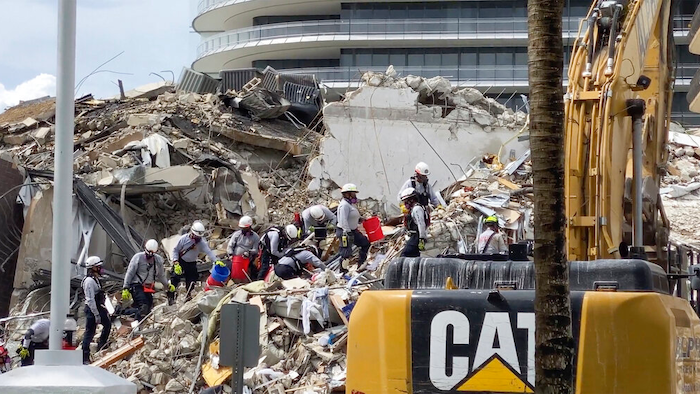 Search teams have been using drones, sonar, highly sensitive microphones and a range of other new and established technologies to help search for people in the oceanside condominium building near Miami that collapsed into a smoldering pile of rubble.

Will any of it help?

About 160 people were still unaccounted for Friday amid fears that the death toll of at least four could go much higher.

What technologies have proven useful in such collapses?

The most common, time-tested technologies used to try to locate survivors in rubble are acoustic detection and sniffer dogs.

Aerial drones equipped with cameras and other sensors can be useful to get a close look at the collapse, especially in the earliest stages of a search to help rescuers know where it's safe to enter. Data from smartphones and telecommunications carriers can show if a missing person was in the area — and cellphone-detecting gadgets can pick up a phone’s signals, as long as it hasn’t been destroyed.

Joana Gaia, a professor of management science and systems at the University of Buffalo, said it's common for search teams to use radar and microwaves that bounce off objects and can identify people and objects. She said it's similar to the technology in cars that beeps when you're close to hitting something backing up.

That can be more useful than cell phone geolocation, especially when speed is of the essence. In a disaster situation, data is only useful if it can be interpreted quickly.

“Responders are operating on a speed rather than accuracy standpoint,” she said. “They think, ‘If I think a body is there I don’t care how accurate the signal is, I’m just going to try to go save the person.’”

What are Miami rescuers using now?

Search and rescue teams worked through the night hoping to detect any sounds coming from survivors.

The crews, which include some 130 firefighters working in teams, are approaching the pile from above and below as they search for any signs of life in what had been a wing of the Champlain Towers South in Surfside, Florida.

They've said they are using sonar, cameras and sensitive microphones. Microphones, though, won't pick up cries for help if a trapped, unseen victim is unconscious but alive, because there won't be any.

Neighboring communities have shared their drones, and at least one company is shipping a ground robot from California to help with the search as crews work to tunnel underneath the building.

“Once you get into that subterranean realm, ground robotics become incredibly useful,” said David Proulx, a vice president of unmanned systems at Teledyne FLIR, a defense contractor that specializes in thermal sensing. “It can safely go where humans can’t.”

Do they still use dogs to sniff out survivors?

Search and rescue operations use two types of dogs on disaster scenes, both trained to detect human scent, said Mark Neveau, a former FEMA presidential appointee and disaster expert. First, there are dogs trained to pick up the scent of live bodies, but as the operation shifts to a recovery operation, cadaver-sniffing dogs take the field.

A drawback with dogs is that they tend to tire with time, and can get confused.

Chemical tracing devices are being developed that also pick up on scents that humans can’t detect, but these haven’t replaced dogs yet. These are portable labs that can analyze chemical traces and gas. They use sensors to detect moisture, carbon dioxide, or any chemicals emitted through breathing, like acetone or ammonia, said the University of Buffalo's Gaia.

“It’s almost like a mechanical sniffing dog, that can be trained to smell things we can’t,” she said.

What other technologies could prove useful in the future?

Drones and ground robots are already used in search operations, but the most sophisticated machines are still expensive, hard to come by and rarely as fast as the skilled human rescuers controlling them. That could change as they become smarter, more nimble and a standard part of search and rescue operations.

“It will be part of the kit that first responders have,” said Proulx, of Teledyne FLIR. “The operation of those drones and robots will be progressively more autonomous. They will be much more independent and operate as teammates rather than tools.”

One technology available to the responders — but not on the scene Friday — is a microwave radar device developed by NASA’s Jet Propulsion Lab and the Department of Homeland Security that “sees” through concrete slabs, detecting the signatures of human respiration and heartbeats.

A prototype saved four lives after the 2015 earthquake in Nepal and it was used two years later in Mexico City. Its developers say it provides an edge over acoustics, the usual method for detecting people in rubble, because disaster sites tend to be noisy.

“Noise doesn’t affect us and we can see through smoke,” said Adrian Garulay, the CEO of SpecOps Group, a Sarasota, Florida company that sells the technology under license. Although it can penetrate up to eight inches of solid concrete it cannot see through metal, he said. It uses a low-powered microwave signal about one-thousandth the strength of a cellphone signal and evolved from NASA’s efforts to develop low-cost, small spacecraft radios.