He is implicated in what prosecutors have labeled the largest leak of classified information in CIA history. 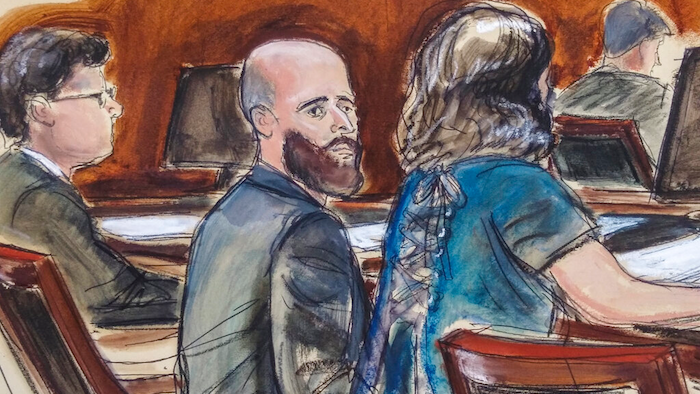 Courtroom sketch of Joshua Schulte, center, with his attorneys during jury deliberations in New York, March 4, 2020.
Elizabeth Williams via AP

NEW YORK (AP) — A former CIA software engineer accused of leaking secrets to WikiLeaks notified a judge Tuesday that he wants to represent himself at an October retrial on espionage charges.

The judge then directed prosecutors to submit legal papers on issues surrounding a hearing that would be conducted to ensure Schulte’s right to a fair trial is protected.

Shroff said the judge may have to decide if Schulte is fit to represent himself and then could assign his lawyers to assist him as what is known as “standby counsel.”

Schulte has pleaded not guilty in the 2017 release of secrets by WikiLeaks that resulted from what prosecutors have labeled the largest leak of classified information in CIA history.

The so-called Vault 7 leak revealed how the CIA hacked Apple and Android smartphones in overseas spying operations and efforts to turn internet-connected televisions into listening devices.

After a year-long investigation, authorities arrested Schulte, who had already left the CIA after falling out with colleagues and supervisors and moved to New York City to work at a news agency.

His lawyers argued at his first trial last year that the leak could have been made by many others. A jury then deadlocked on the espionage charges while convicting him of less serious charges of contempt of court and making false statements.

Prior to his arrest, Schulte worked as a coder at the agency’s headquarters in Langley, Virginia, where some of the CIA’s digital sleuths design computer code to spy on foreign adversaries.

In January, Schulte represented himself in a court filing in which he complained that he was subjected to cruel and unusual punishment by being forced to await trial in solitary confinement in a vermin-infested cell of a jail unit where inmates are treated like “caged animals.”

After the October trial, Schulte will face child pornography charges in a separate trial.