Rogue states and their enablers could manipulate tracking systems to hide ship movements and circumvent sanctions. 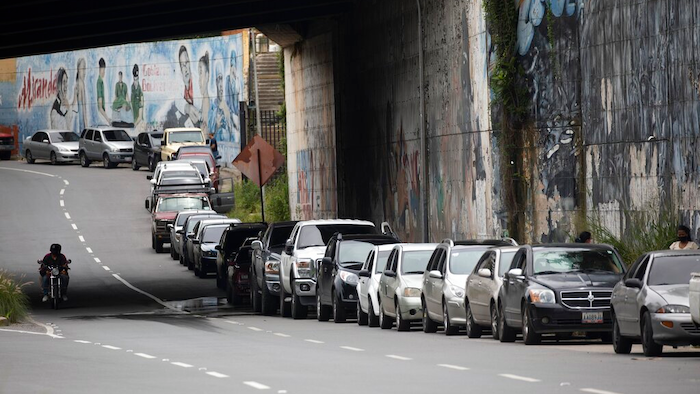 Vehicles line up near a gas station to fill their tanks in Caracas, Venezuela, Sept 8, 2020.
AP Photo/Ariana Cubillos, File

MIAMI (AP) — The Cyprus-flagged oil tanker Berlina was drifting near the Caribbean island of Dominica earlier this year when tracking technology showed it stopping in its tracks and in two minutes turning around 180 degrees.

It was an amazingly quick pivot since the 274-meter (nearly 900-foot) ship needs roughly 10 times that amount of time to perform such a maneuver.

Even more intriguing: Around the same time the Berlina was pinging its location at sea, it was physically spotted loading crude oil in nearby Venezuela despite U.S. sanctions against such trading.

Meanwhile, nine other ships, some connected to the same Greece-based owner of the Berlina, were digitally monitored moving nearby at an identical speed and direction with sudden draft changes, indicating they had somehow been loaded full of crude though apparently out at sea.

The Berlina’s impossible journey could represent the next frontier of how rogue states and their enablers manipulate GPS-like tracking systems to hide their movements while circumventing sanctions, maritime experts say.

In recent years, as the U.S. has expanded economic sanctions and tracking technology has become more widely used, companies have adopted a number of techniques to evade detection. Most involve a ship going dark, by turning off its mandatory automated identification system or by “spoofing” the identity and registration information of another ship, sometimes a sunken or scrapped vessel.

Windward, a maritime intelligence agency whose data is used by the U.S. to investigate sanctions violations, carried out a detailed investigation into the Berlina. It considers the movements of the Berlina and the other ships to be one of the first instances of orchestrated manipulation in which vessels went dark for an extended period while off-ship agents used machines to hide their activities by making it appear they were transmitting their locations normally.

Militaries around the world have been using the same electronic warfare technology for decades. But it is only now cropping up in commercial shipping, with serious national security, environmental and maritime safety implications.

“We believe this is going to spread really fast because it’s so efficient and easy,” Matan Peled, co-founder of Windward, said in an interview. “And it’s not just a maritime challenge. Imagine what would happen if small planes started adopting this tactic to hide their true locations?”

Under a United Nations maritime treaty, ships of over 300 tons have been required since 2004 to use the automated identification system to avoid collisions and assist rescues in the event of a spill or accident at sea. Tampering with its use is a major breach that can lead to consequences for a vessel and its owners.

But the maritime safety mechanism has also become a powerful mechanism for tracking ships engaged in rogue activities like illegal fishing or transporting sanctioned crude oil to and from places under U.S. or international sanctions like Venezuela, Iran and North Korea.

In the cat-and-mouse game that has ensued, the advent of digital ghosts leaving false tracks could give the bad actors the upper hand, said Russ Dallen, the Miami-based head of Caracas Capital Markets brokerage, who tracks maritime activity near Venezuela.

“It’s pretty clear the bad guys will learn from these mistakes and next time will leave a digital trail that more closely resembles the real thing,” Dallen said. “The only way to verify its true movement will be to get a physical view of the ship, which is time consuming and expensive.”

The Berlina never reported a port call while floating in the Caribbean. Nonetheless, on March 5, the draft indicated by its identification system went from 9 meters to 17 meters (30 feet to 60 feet), suggesting it had been loaded with oil.

Was it manipulation or a malfunction?

While the Berlina’s voyage remains something of a mystery, Vortexa, a London-based energy cargo tracker, determined the tanker had loaded at the Venezuelan port of Jose on March 2 and then headed toward Asia. Separately, Windward also confirmed the crude delivery through two sources.

Two months later, on May 5, the Berlina discharged its crude in a ship-to-ship transfer to a floating storage vessel, the CS Innovation, according to Vortexa. The CS Innovation remains off the coast of Malaysia where the transfer took place and has undertaken a number of ship-to-ship transfers in the interim, making it nearly impossible to know where Venezuela’s oil will end up.

Adding to suspicions, the Berlina and at least four of the nine other vessels involved in the Caribbean voyage earlier this year are connected to the same Greek company, according to Windward. And all 10 vessels switched flags — another common ploy used to make it harder to keep track of ships — to Cyprus in the four months prior to the manipulation of the fleet’s tracking information.

The AP was unable to locate any contact information for the Berlina’s ship manager or owner, both of which are based in the port city of Pireaus, near Athens.

Peled said the Berlina’s activities may never have been detected if not for a tip it received from an external source that it wouldn’t identify.

But the know-how gained from the investigation has allowed it to identify other recent examples of location tampering, including one in January when a ship it did not identify was spotted loading Iranian crude at Kharg island while broadcasting its location out at sea somewhere else in the Persian Gulf.

While the U.S. government has additional resources to ferret out such deceptive practices, doing so will require extra effort.

"It suggests the length to which rogue actors are willing to go, to hide their activities,” said Marshall Billingslea, an assistant Treasury secretary for terrorist financing during the Trump administration and former deputy undersecretary of the Navy. “It’s a worrisome trend and given the huge volume of maritime traffic will introduce a lot more noise into the system.”