The bot helped the team rigorously test and prove its hydrofoil designs in a computer simulator. 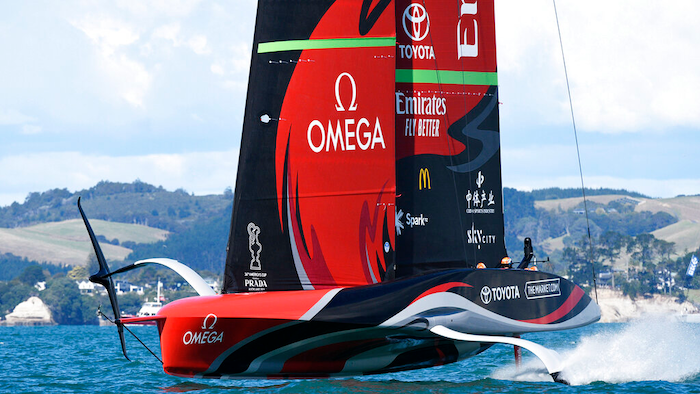 Team New Zealand sails against Italy's Luna Rossa at the start of race 3 of the America's Cup on Auckland's Waitemata Harbour, March 12, 2021.
Chris Cameron/Photosport via AP

WELLINGTON, New Zealand (AP) — Team New Zealand’s ace in the hole in its successful defense of the America’s Cup may have been a sailor who was never seen on the water but who clocked more miles than all of the crew of the winning boat Te Ruhetai.

It didn’t have the profile of Pete Burling or Blair Tuke and it didn’t get to spray champagne on the stage at Wednesday’s trophy presentations. But its tireless efforts were influential if not decisive in Team New Zealand’s 7-3 win over Italy’s Luna Rossa in the 36th Cup match.

It was capable at times of out-sailing the Team New Zealand afterguard and, then, only months after it had learned to sail in a straight line.

The mystery sailor was a bot, a robot, or an artificial intelligence creation which became in effect a virtual sailor. It did its vital work in the computer simulator on which Team New Zealand’s winning hydrofoil designs were rigorously tested and proven. The hydrofoils make the AC75 class boats fly above the water.

Time is critical in America’s Cup campaigns and Team New Zealand partnered with the consulting firm McKinsey & Company and its subsidiary QuantumBlack to come up with an artificial intelligence solution to maximize use of the simulator.

McKinsey’s solution was to develop and AI bot that could learn to use the simulator by itself, without the sailors needing to be present.

“The Team New Zealand simulator is arguably the most advanced sailing simulator in the world and for that reason they’re very confident when they load in a hydrofoil to test in the simulation environment they’re going to get really good data that is very applicable on the water,” McKinsey senior partner Brian Fox told The Associated Press from New Jersey.

“The trouble is that to operate the simulator it takes the whole afterguard of the boat. You have to get Pete (Burling), Blair (Tuke) and the other key controllers, depending on how you set it up, four of them in the simulator working on together to log a run.

“And when the designers put in a hydrofoil the sailors need to come off the water and test it and they need to do a bunch of runs on the simulator to get consistent data.”

Fox, a keen sailor, said McKinsey’s solution was “to essentially take the sailors out of the question."

“If I got in the simulator it would blow me away. Against Pete it does a little bit better but it does it consistently better. Importantly, it does it very quickly, faster than the sailors can do run after run after run.”

Project leader Nicolas Hohn, more at home in the French alps than on the water, said the bot’s unprecedented learning abilities vastly accelerated the design process.

McKinsey used an extremely advanced process called reinforcement learning to allow the bot to learn from its own mistakes.

“Fundamentally you want to teach a computer how to sail a given boat design in the simulator as best as possible,” Hohn said. “And as best as possible is really important because if the computer is not as good as the sailors there’s no value in us doing that because we want to rank the designs."

In reinforcement learning, the bot is rewarded when it sails well.

“This reward component becomes really important because reinforcement learning is a way of learning which is very, very generic and that’s very similar in a way to how human’s would learn,” Hohn said. “If you think as a toddler you’re trying to learn to walk and suddenly gravity will pull you back down, that’s kind of a negative reward. And then you stand up again and slowly but surely you learn to balance yourself. You start crawling, you work and ultimately you run.

“It’s very similar to the way our program actually learns to sail. You start by learning very simple things like going in a straight line with no wind and then slowly but surely you add more complexity to it.”

“It’s very interesting,” Fox said. “Initially in certain maneuvers, in certain wind speeds it would perform the maneuvers differently to the sailors.

“Initially the sailors sort of pooh-poohed it but then they started paying real attention to it and started trying that on the water and found that in fact it did work on the water as well.”

“There are a few things I really appreciated about working with Team New Zealand,” Fox said. “One is that everyone is a constant learner. They’re constantly stretching to improve, to challenge assumptions and to just get as much insight out of everything they do as possible.

“There’s an extreme lack of ego and a huge spirit of team work and common purpose. In some ways I think over time they came to see the virtual sailor as just another teammate who was helping them to achieve their overall objective.”