Iowa currently ranks near the bottom in doses administered. 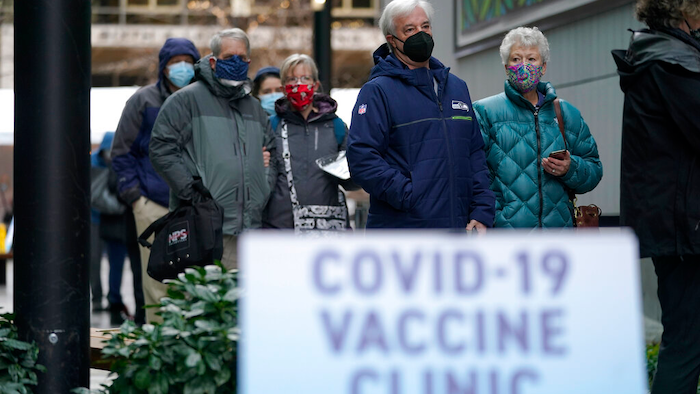 IOWA CITY, Iowa (AP) — Iowa public health officials selected Microsoft to create an online COVID-19 vaccination scheduling system as they seek to get past a frustrating start that has the state ranked near the bottom nationally in doses administered.

The Iowa Department of Public Health posted notice online Monday that it intends to award an emergency contract to Redmond, Washington-based Microsoft. The agency told bidders that it would select a separate contractor to run a vaccine call center later this week.

Microsoft's selection came after the agency last week gave vendors one day to respond to an emergency request for proposals.

Microsoft will be responsible for developing and deploying an online registration system that will allow eligible residents to schedule vaccination appointments with approved providers. Its contract is expected to last through the end of the year.

The health agency decided to split up the request for proposals to award a separate contract for a call center to provide information about vaccine availability, screen callers for eligibility and help set up appointments.

A department review team is still scoring bids for that work and expects to make a selection by Friday.

Iowa's vaccination program has gotten off to a slow start due to a supply shortage and a lack of information about the best way to schedule an appointment.

Many essential workers and people ages 65 and older who became eligible for shots on Feb. 1 have been unable to find doses despite spending hours making calls or searching online. The slow rollout has infuriated some public school teachers, including many whose class sizes will double next week when Gov. Kim Reynolds' new mandate for daily in-person learning takes effect.

Iowa ranks 47th among the states with only 8% of its population having received at least one dose of the vaccine, according to data from the Centers for Disease Control and Prevention. It ranks in the middle for the number of people who have received both doses and 40th overall in doses distributed per capita.

The governor has largely blamed the state's problems on its low vaccine allocation from the federal government, which she said last week was 47th per capita. She also indicated that some counties were not administering their doses quickly enough and that she would put in new metrics to speed them up.

Reynolds said that the state did not create an online scheduling system earlier to avoid problems seen elsewhere with appointments getting cancelled due to a lack of supply. She said she didn't want people to “get their hopes up” before they could be guaranteed shots, but that the new online system will arrive as supply increases.

“We believe it will be a relatively quick turnaround and we’ll be in a good position to really expedite, streamline and help Iowans maneuver through scheduling and getting a vaccine,” she said last week.

On Friday, the Republican governor lifted a statewide mandate to wear masks in some circumstances, social distancing requirements for bars, and limits on gatherings. She cited a decline in COVID-19 hospitalizations, which have dipped to 327 from a peak of more than 1,500 in November.

The moves drew outrage from public health experts and Democratic lawmakers, who noted that the new highly contagious U.K. variant was only recently found in the state. Several municipalities said they would still enforce local mask ordinances.