The mobile docking system could be adapted for exploration of extraterrestrial lakes, such as those of Jupiter and Saturn's moons. 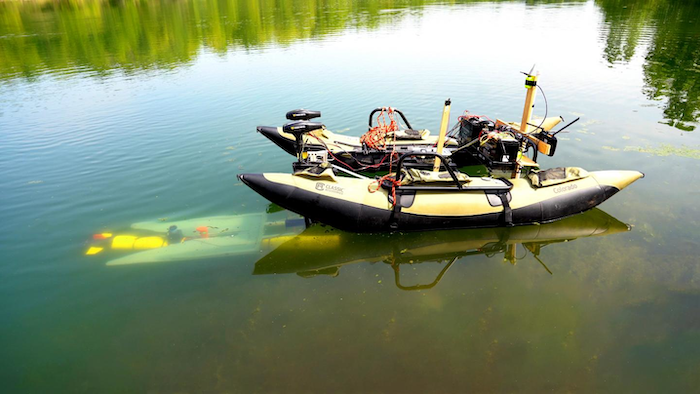 A yellow underwater robot finds its way to a mobile docking station to recharge and upload data before continuing a task.
Purdue University/Jared Pike

WEST LAFAYETTE, Ind. -- Robots can be amazing tools for search-and-rescue missions and environmental studies, but eventually they must return to a base to recharge their batteries and upload their data. That can be a challenge if your robot is an autonomous underwater vehicle (AUV) exploring deep ocean waters.

Now, a Purdue University team has created a mobile docking system for AUVs, enabling them to perform longer tasks without the need for human intervention.

The team also has published papers on ways to adapt this docking system for AUVs that will explore extraterrestrial lakes, such as those of Jupiter and Saturn's moons.

Once a marine robot submerges in water, it loses the ability to transmit and receive radio signals, including GPS data. Some may use acoustic communication, but this method can be difficult and unreliable, especially for long-range transmissions. Because of this, underwater robots currently have a limited range of operation.

"Typically these robots perform a pre-planned itinerary underwater," Mahmoudian said. "Then they come to the surface and send out a signal to be retrieved. Humans have to go out, retrieve the robot, get the data, recharge the battery and then send it back out. That's very expensive, and it limits the amount of time these robots can be performing their tasks."

Mahmoudian's solution is to create a mobile docking station that underwater robots could return to on their own. A video describing this research is available on YouTube at https://www.youtube.com/watch?v=_kS0_-qc_r0.

"And what if we had multiple docks, which were also mobile and autonomous?" she said. "The robots and the docks could coordinate with each other, so that they could recharge and upload their data, and then go back out to continue exploring, without the need for human intervention. We've developed the algorithms to maximize these trajectories, so we get the optimum use of these robots."

A paper on the mission planning system that Mahmoudian and her team developed has been published in IEEE Robotics and Automation Letters. The researchers validated the method by testing the system on a short mission in Lake Superior.

"What's key is that the docking station is portable," Mahmoudian said. "It can be deployed in a stationary location, but it can also be deployed on autonomous surface vehicles or even on other autonomous underwater vehicles. And it's designed to be platform-agnostic, so it can be utilized with any AUV. The hardware and software work hand-in-hand."

Mahmoudian points out that systems like this already exist in your living room. "An autonomous vacuum, like a Roomba, does its vacuum cleaning, and when it runs out of battery, it autonomously returns to its dock to get recharged," she said, "That's exactly what we are doing here, but the environment is much more challenging."

If her system can successfully function in a challenging underwater environment, then Mahmoudian sees even greater horizons for this technology.

"This system can be used anywhere," she said. "Robots on land, air or sea will be able to operate indefinitely. Search-and-rescue robots will be able to explore much wider areas. They will go into the Arctic and explore the effects of climate change. They will even go into space."