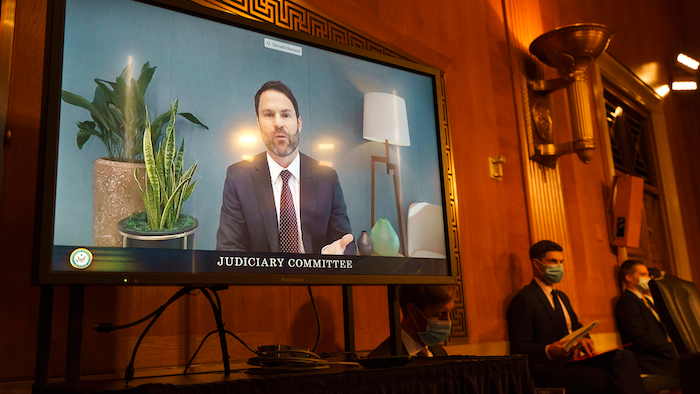 WASHINGTON (AP) — A Senate panel put a top Google executive on the defensive Tuesday over the company’s powerful position in online advertising as some lawmakers look hopefully toward an expected antitrust case against the tech giant by the Trump administration.

Donald Harrison, Google’s president for global partnerships and corporate development, insisted at a hearing by the Senate Judiciary antitrust subcommittee that Google’s ad business faces ample competition, has benefited consumers, and has kept prices low for advertisers and publishers such as local newspapers.

The Justice Department has pursued a sweeping antitrust investigation of big tech companies, looking at whether the online platforms of Google, Facebook, Amazon and Apple have hurt competition, stifled innovation or otherwise harmed consumers. The department is reportedly readying a major case accusing Google of abusing its dominance in online search and advertising to stifle competition and boost its profits.

That expected action “could be the beginning of a reckoning for our antitrust laws,” said Sen. Amy Klobuchar of Minnesota, the panel’s senior Democrat. She said she hoped “there’s a start” at the Justice Department and that also “things are going on” at the Federal Trade Commission, which has carried on a separate antitrust investigation of the Big Tech companies.

The administration has long had Google in its sights. A top economic adviser to President Donald Trump said two years ago that the White House was considering whether Google searches should be subject to government regulation. Trump himself has often criticized Google, recycling unfounded claims by conservatives that the search giant is biased against conservatives and suppresses their viewpoints, interferes with U.S. elections and prefers working with the Chinese military over the Pentagon.

Google has denied the claims and insisted that it never ranks search results to manipulate political views.

The company has acknowledged that it’s been in discussions with the Justice Department as well as state attorneys general, without elaborating on the nature of the talks. A bipartisan coalition of 50 U.S. states and territories, led by Texas Attorney General Ken Paxton, announced a year ago that they were investigating Google’s business practices, citing “potential monopolistic behavior.”

The issue of perceived bias by Google against conservatives also arose at Tuesday’s hearing. Subcommittee chairman Sen. Mike Lee, R-Utah, and other Republicans raised an instance in which Google warned the Federalist Society, a conservative legal organization, that its news website could be banned from making money from Google’s ad platform because of remarks in the site’s comment section that Google considered racist.

Lee told Harrison that Google was applying a double standard in its treatment of the Federalist web site, by invoking free-speech legal protections that shield it from liability for users’ offensive comments. “This is how a company acts when it senses, perhaps correctly, that it doesn’t have competition,” Lee said.

But mostly the senators homed in on Google’s position in advertising as they questioned Harrison. In the “ad tech” marketplace bringing together Google and a huge universe of advertisers and publishers, the company controls access to the advertisers that put ads on its dominant search platform. Google also runs the auction process for advertisers to get ads onto a publisher’s site. In addition, Google owns Android, which is the world’s largest mobile operating system, email systems, video service YouTube and mapping services, which provide it with users’ data that it can deploy in the advertising process.

“This looks like monopoly upon monopoly,” said Sen. Josh Hawley, a Missouri Republican who is a leading critic of Big Tech.

Klobuchar cited research showing that Google may be taking between 30% and 70% of every ad dollar spent by advertisers using its services — money that critics say should go to publishers that produce content and run the ads, such as newspapers.

Google, whose parent is Alphabet Inc., controls about 90% of web searches. Google has long argued that although its businesses are large, they are useful and beneficial to consumers.

Harrison said that Google shares the majority of its “ad tech” revenue with publishers.

He rejected even the lawmakers’ assertion that Google is dominant, saying that market dominance suggests abuse, which is foreign to the company. He reeled off names of competitors in “ad tech” business: Adobe, Amazon, AT&T, Comcast, Facebook, News Corp., Oracle and Verizon.

“We know that we’re popular,” Harrison said. “But we don’t agree that we’re dominant.” Consumers have “tons of choices,” he said.

Harrison noted that online advertising prices in the U.S. have fallen more than 40% since 2010, according to Federal Reserve data. Last year, Google’s search and advertising tools generated $385 billion in economic activity for U.S. businesses, he said.