Parliament approved the app after a sharp debate focusing on privacy protection. 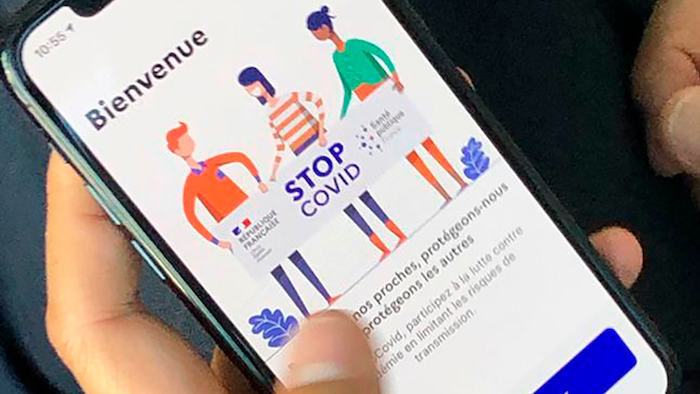 French Digital Affairs junior minister Cedric O demonstrates how to use the StopCovid app in Paris, May 29, 2020.
AP Photo/Masha MacPherson

PARIS (AP) — As France is easing most virus-related restrictions next week, the French government is confident its contact-tracing app will be effective in the process to contain the spread of the pandemic, despite skepticism and worries about privacy.

The man at the forefront of the French app, junior minister for digital economy Cedric O told The Associated Press on Friday, “it is not a miracle solution, but it is useful and necessary.”

The StopCovid app is set to be available to the public on June 2, when the country starts reopening its restaurants and cafes together with monuments and museums, theaters, gyms and public swimming pools. It will make France the first major world democracy to roll out such a tracing app.

Holding his phone with the app opened, O said: “Imagine we’re sitting next to each other or face to face - we don’t know each other. Or we pass each other in the metro. Both our phones will keep a trace of that contact."

People tested positive to the virus will be able to send a quick notification in the app to warn people they were in close contact with, allowing them to call a doctor and get a test.

Like other countries, France sees the app as an additional measure to contain the spread of the coronavirus that comes in addition to manual contact tracing, which involves workers interviewing people who test positive for the virus.

O said the app has been tested for two weeks and the government is confident that the data are protected.

“The installation of the app is on a voluntary basis only: no one can force you to install it. It’s anonymous: no one has access to the data. Neither you, nor the state or others," he insisted.

In addition, the app does not create a list of infected people and the data is cleared after 14 days, he said.

O also noted the government published the code of the app so that experts can check it.

The French parliament on Wednesday approved the app after a sharp debate focusing on privacy protection.

Some opposition lawmakers expressed fears the app would lead to broader surveillance from the state. Others shared doubts about its efficiency if only a small part of the population accept to use it.

Gérald Schneiber, 43, who works in Paris, said “it’s out of question” to download it.

“I won’t let anyone keep a close watch on me – and I hope it will never happen in France,” he said.

Parisian Florence Cieslak, 34, said she’s in favor of “anything that can help in the fight against COVID-19 and protect the population.”

She is ready to install the app, but only after carefully reading the fine print on data protection and compliance with GDPR, the EU’s General Data Protection Regulation.

The French app uses low-energy Bluetooth signals on mobile phones to trace individuals that people infected with the virus come into close contact with. It will store anonymous data in a government-run centralized database.

O advocated for France's choice not to use a Google-Apple technology released last week, because “we think health data should be stored by health authorities and not by the private sector" - notably after the tech world faced scandals in the past about how it uses private data.

Germany, Italy, Austria, Estonia, Switzerland, and Ireland are embracing a “decentralized” approach, widely preferred by researchers and privacy experts because anonymous identifier codes for contacts are kept on devices only. The Google-Apple technology works with the decentralized system and is being used notably by Germany.

But the French government considered the decentralized solution “is less efficient from healthcare point of view. We'd have less information,” O said.