16-year-old Syu Kato is putting his knack for programming to good use. 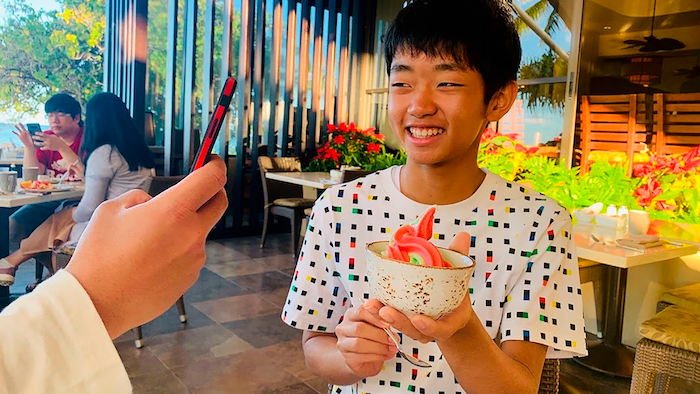 TOKYO (AP) — Curbing the spread of the coronavirus pandemic rests on knowing where infected people have been and who they've come in contact with so they can be tested and treated.

Like many teens, 16-year-old Syu Kato loves skateboarding, Bruno Mars and hamburgers. But he's putting his knack for programming to good use. Kato has designed an iPhone software application that uses GPS so individuals can keep their own records of their whereabouts in their mobile phone, to help with such contact tracing.

Called Asiato, for “footprint," the app keeps track of a phone's movements within a distance of 10 meters (33 feet) or more. An English version of the app is available free from the iPhone App Store.

The app works like a diary, but keeps track of locations. To protect privacy, the data is stored in the phone and is not automatically shared.

If a person discovers they have COVID-19, Asiato identifies where they've been in the past several weeks. They would need to reach out on their own to people they may have infected, or inform health authorities if asked.

Under Japan's pandemic state of emergency, citizens are asked, not ordered, to stay home. Keeping track of their movements remains a crucial way to help control the spread of the virus that causes COVID-19. It also could be used elsewhere as economies reopen around the world, Kato said.

Kato got an early start in putting his knack for programming to good use. In the fifth grade, he designed a mathematics application to do division that gives the remainder as a number for the answer, not decimal points.

While in sixth grade, he developed a program for writing book reports. The 240 yen (about $2) program simplifies the process and no cheating is involved, he says.

In 2017, Kato won the “super creator” award from the government-backed Mitou Foundation, set up to support innovation, for his DrawCode, which simplifies writing the language for web pages and programs, known as HTML, so children can do programming.

Yu Ukai, who heads the foundation’s youth efforts, said he was impressed with Kato’s passion and the speed with which he identifies problems and comes up with solutions.

“There are a lot of ways young people like Syu can contribute to society during the pandemic as the crisis reveals many challenges that can be solved using technology,” Ukai said.

Kato’s new project is setting up a website for restaurants and customers to share menus and other takeout information.

Tokyo and other major cities have Uber Eats and other services. But in places like Hokkaido, northern Japan, where Kato lives, it’s harder for people stuck at home to find options for food takeout or delivery. Such a site would also help hard-hit restaurants find customers.

Kato is a digital whiz in what he says is an “analog” family. His parents run a small amusement park and his older brother works there. The downturn in tourism due to the pandemic has devastated the family business.

Plans for Kato to attend school in the U.S. later this year were canceled because of the pandemic and he is studying online. But he hopes eventually to travel overseas and maybe start his own venture.

What draws him to coding is the sheer joy of creation, he said.

“Then if I can also make a bit of money, that would be great,” he laughed.

It's tough competing as the little guy against big players, Kato said.

Going after niche needs sometimes fails because you’ve gone after something too niche, he said.

“It’s not enough to be able to program,” Kato said. “You have to make it a real product and release it to the world, without giving up, so lots of people can download it and experience it.”