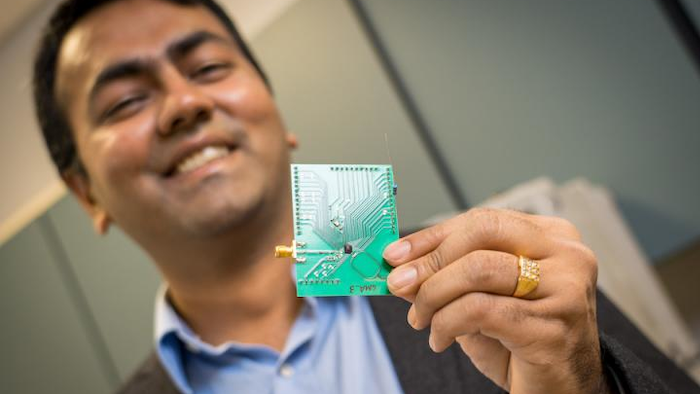 More portable, fully wireless smart home setups. Lower power wearables. Batteryless smart devices. These could all be made possible thanks to a new ultra-low power Wi-Fi radio developed by electrical engineers at the University of California San Diego.

The device, which is housed in a chip smaller than a grain of rice, enables Internet of Things (IoT) devices to communicate with existing Wi-Fi networks using 5,000 times less power than today's Wi-Fi radios. It consumes just 28 microwatts of power. And it does so while transmitting data at a rate of 2 megabits per second (a connection fast enough to stream music and most YouTube videos) over a range of up to 21 meters.

The team will present their work at the ISSCC 2020 conference Feb. 16 to 20 in San Francisco.

"You can connect your phone, your smart devices, even small cameras or various sensors to this chip, and it can directly send data from these devices to a Wi-Fi access point near you. You don't need to buy anything else. And it could last for years on a single coin cell battery," said Dinesh Bharadia, a professor of electrical and computer engineering at the UC San Diego Jacobs School of Engineering.

"This Wi-Fi radio is low enough power that we can now start thinking about new application spaces where you no longer need to plug IoT devices into the wall. This could unleash smaller, fully wireless IoT setups," said UC San Diego electrical and computer engineering professor Patrick Mercier, who co-led the work with Bharadia.

Think a portable Google Home device that you can take around the house and can last for years instead of just hours when unplugged.

"It could also allow you to connect devices that are not currently connected--things that cannot meet the power demands of current Wi-Fi radios, like a smoke alarm--and not have a huge burden on battery replacement," Mercier said.

The Wi-Fi radio runs on extremely low power by transmitting data via a technique called backscattering. It takes incoming Wi-Fi signals from a nearby device (like a smartphone) or Wi-Fi access point, modifies the signals and encodes its own data onto them, and then reflects the new signals onto a different Wi-Fi channel to another device or access point.

This work builds on low-power Wi-Fi radio technology that Bharadia helped develop as a Ph.D. student at Stanford. In this project, he teamed up with Mercier to develop an even lower-power Wi-Fi radio. They accomplished this by building in a component called a wake-up receiver. This "wakes up" the Wi-Fi radio only when it needs to communicate with Wi-Fi signals, so it can stay in low-power sleep mode the rest of the time, during which it consumes only 3 microwatts of power.

The UC San Diego team's improvements to the technology also feature a custom integrated circuit for backscattering data, which makes the whole system smaller and more efficient, and thus enables their Wi-Fi radio to operate over longer communication range (21 meters). This is a practical distance for operating in a smart home environment, the researchers said.

"Here, we demonstrate the first pragmatic chip design that can actually be deployed in a small, low-power device," Mercier said.