It remains unclear how many people want a Facebook-branded smart camera in their homes given the company's history of privacy problems. 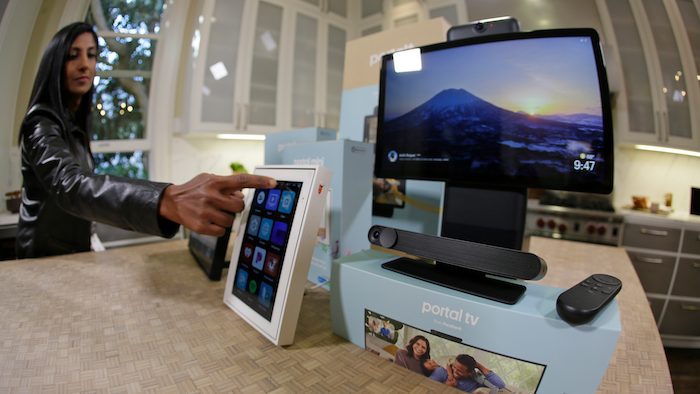 SAN FRANCISCO (AP) — Facebook is slashing the price and the size of the Portal, its screen and camera-equipped gadget for making video calls with friends and family as it attempts to get the device into more homes.

A new screenless Portal device that attaches to a television set will be $149.

Facebook isn't saying how many Portals it's sold since it launched the first models last fall. It remains unclear how many people want a Facebook-branded smart camera in their homes, given the company's history of privacy problems .

Facebook executives unveiled the new gadget at a small event in San Francisco this week. In addition to losing a few inches, Portal has been redesigned to look less like a space-age gadget and more like a picture frame.

The product is also launching in more countries and will work with WhatsApp to make video calls, in addition to Facebook's Messenger app. And will now stream Amazon Prime videos.

Facebook has tried to assuage privacy concerns with the Portal. The service will not show ads, but "we are using Facebook's infrastructure, so some data may inform ads on Facebook," said Andrew "Boz" Bosworth, vice president of virtual reality and augmented reality. "But that's not the point of it, it's not something that is going to be material to Facebook."

For instance, if someone makes a lot of video calls on Portal, they might see ads for video calling devices elsewhere. But Facebook says it doesn't use the content of the calls for ad targeting, though Bosworth declined to commit to never doing so in the future.

The Portal and the Portal Mini go on sale Oct. 15; the screenless version ships on Nov. 5.