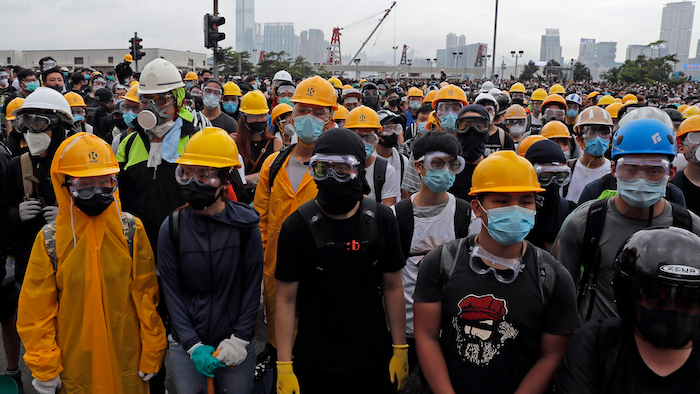 In this photo taken on Wednesday, June 12, 2019, protestors wear masks and helmets to protect their identities near the Legislative Council in Hong Kong.
AP Photo/Kin Cheung

Young Hong Kong residents protesting a proposed extradition law that would allow suspects to be sent to China for trial are seeking to safeguard their identities from potential retaliation by authorities employing mass data collection and sophisticated facial recognition technology.

Agnes, a second-year college student who declined to give her surname, said she donned a face mask as soon as she left a subway train in the downtown Admiralty district to join Wednesday's overnight protest by pro-democracy demonstrators.

"Everybody coming out is wearing masks because you don't know what people will do with the information," Agnes said as friends nodded in agreement. None of them would give their names, saying they worried about how school authorities would react if Hong Kong or China's central government asked for information about them.

To further protect their privacy, the group was buying single-trip train tickets with cash rather than using their stored-value electronic cash cards that forward information on travel and locations to a central repository.

The semi-autonomous Chinese territory has installed thousands of security cameras but the data is mostly kept private. In mainland China, the government openly uses the technology to track down people considered politically unreliable, particularly among Muslim Uighurs, Tibetans and other minority groups.

In addition to closed-circuit television cameras spaced throughout the city, dozens of television stations and other news outlets have been broadcasting and publishing images of protesters.

Attitudes among younger Hong Kong residents such as Agnes reflect a growing sophistication among government critics since massive 2014 protests that shut down much of the downtown area in a demand for universal suffrage but ultimately fizzled without achieving their goals. Since then, the government has sentenced many of the leaders of what has become known as "Occupy Central" or the "Umbrella Movement" to prison on vague charges of causing public disturbances or inciting other people to do so.

Hong Kong police officials on Thursday said they made 11 arrests among Wednesday's protesters and defended their right to track down those who had been sent to hospitals for treatment of injuries.

Chinese authorities were recently discovered to be maintaining real-time data on more than 2.5 million people in western China, updated constantly with GPS coordinates of their precise whereabouts. Alongside their names, birthdates and places of employment, there were notes on the places that they had most recently visited, including mosques, hotels and restaurants.

The database appeared to have been recording people's movements tracked by facial recognition technology, logging more than 6.7 million coordinates in a span of 24 hours. It illustrated how far China has taken facial recognition and served as a reminder of how easily technology companies can leave supposedly private records exposed to global snoopers.

Chinese authorities have also begun deploying a new surveillance tool that uses people's body shapes and how they walk to identify them, even when their faces are hidden from cameras.

Already used by police on the streets of Beijing and Shanghai, "gait recognition" is part of a push across China to develop artificial intelligence and data-driven surveillance that is raising concern about how far the technology will go.

Older protesters professed less concern about being caught on video at Wednesday's demonstration, saying they were already secure in their lives and careers.

"I don't give it too much thought," said Andy Lau, an engineering professor at a Hong Kong polytechnic who was passing out leaflets calling for an end to police attacks and the resignation of the current Hong Kong government amid a crowd of protesters on a pedestrian bridge opposite the Legislative Council.

However, Lau said younger protesters were well advised to guard their identities and personal data if they want to join the demonstrations.

"It's not just a problem after you cross the border into China. Even here in Hong Kong the police or school leaders can come tracking you down and knocking on your door at night," Lau said.