Proposed legislation would restrict the weight of the robots, limit them to sidewalks and crosswalks, and require both insurance and active monitoring by a human. 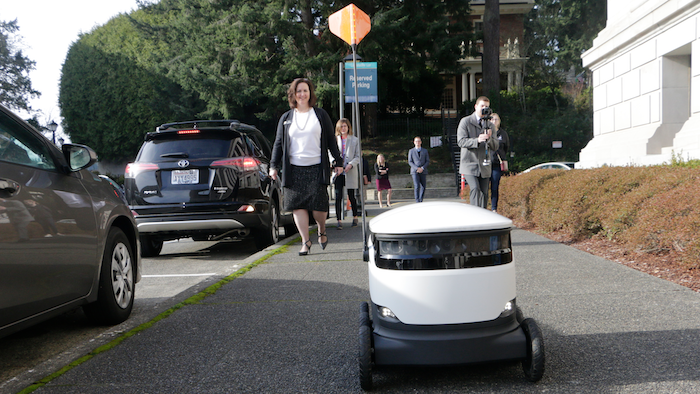 A delivery device drives down a sidewalk outside the Washington Capitol in Olympia, Wash., on Monday, Jan. 28, 2019.
AP Photo/Rachel La Corte

The future, it turns out, makes a quiet whirring sound.

With little more fanfare than the soft buzz of its motor, a new kind of vehicle rolled down a concrete ramp in front of onlookers at the Washington state Capitol Monday: A delivery robot designed for carrying packages to consumers' doors, among the first of its kind in the state.

The devices are kicking off debate over regulating the latest frontier of automation in the state, even as online retail giant Amazon has already begun testing them. A bill up for a hearing Monday would restrict the weight of the robots, limit them to sidewalks and crosswalks, and require both insurance and active monitoring by a human, filling in what the bill's sponsor called a gray area in state law.

"What would you define this as? Is it a motor vehicle, is it a pedestrian? We don't have, currently, rules that would define the behavior of this," said Democratic Rep. Shelley Kloba, gesturing to the robot at the demonstration.

Amazon is ahead of lawmakers, however, and has already begun taking steps to replace delivery staff with robots in the state. The company announced last Wednesday that it had begun testing autonomous delivery vehicles in Snohomish County, just north of Seattle.

The company posted on its website that it was starting with six of the devices, each about the size of a cooler with six wheels and a shiny blue case. They will be accompanied by an employee on their routes — at least to start.

Visually similar to Amazon's six-wheeled cube, the device showcased Monday came from Starship Technologies, a company that already operates in other states.

Employees usually monitor several of the devices at a time, with the ability to jump to any one of them should a problem arise, said David Catania, a Starship representative. But, Catania added, the units typically remain in autonomous mode "90-plus" percent of the time.

While the robots can't climb stairs, Catania added, they are able to raise their front wheels to mount curbs, and can carry the equivalent of about two bags of groceries.

Kloba said she was still seeking input from disability rights advocates about the safe top speed of the devices on sidewalks, and that her bill wouldn't stop local jurisdictions from imposing their own licensing rules or quotas.