California Lays Out Plan to Drastically Cut Fossil Fuel Use 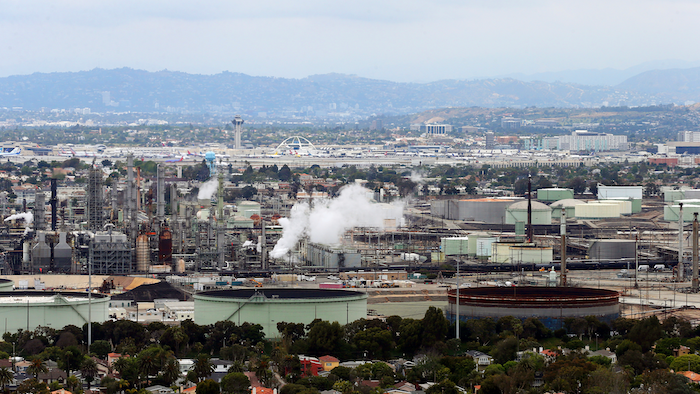 This aerial photo shows the Standard Oil Refinery in El Segundo, Calif., with Los Angeles International Airport in the background and the El Porto neighborhood of Manhattan Beach, Calif., in the foreground on May 25, 2017. A plan released by the California Air Resources Board on Tuesday, May 10, 2022, recommends a majority of the state's oil refineries install carbon capture technology by 2030. Such technology could be used to capture carbon emissions so they don't go out into the atmosphere.
AP Photo/Reed Saxon, File

SACRAMENTO, Calif. (AP) — New homes built in California starting in 2026 need to be powered by all-electric furnaces, stoves and other appliances if California is to meet its ambitious climate change goals over the next two decades, according to a state pollution-reduction plan released Tuesday.

The roadmap by the California Air Resources Board sets the state on a path to achieve “carbon neutrality” by 2045, meaning as much carbon is removed from the air as is emitted. The state’s timeline is among the most ambitious in the nation; Hawaii has a similar goal and some other states have a 2050 deadline.

California could reach its goals through a drastic transition away from fossil fuels that power cars, trucks, planes, ships, homes, businesses and other sectors of the economy. The board staff recommends the state cut the use of oil and gas by 91% by 2045 and use technology to capture and store carbon emissions from remaining sources.

The plan was put together by air board staff and it is not final; a public comment process will begin and the political appointees who make up the air board will ultimately decide whether to make any changes. The Legislature or other regulatory bodies would have to agree to put the various policies in place. The California Energy Commission, for example, sets building codes.

Still, state officials said the document represents an important step for California and the rest of the nation. California is the nation's most populous state and has the world's fifth largest economy compared to other nations. That economic power means the state's policy choices can drive major business changes, and other states often follow California's lead on climate policy.

“When final, this plan will serve as a model for other industrial economies around the world,” said Jared Blumenfeld, secretary of the California Environmental Protection Agency.

But neither environmental justice advocates nor the oil industry were happy. Environmental groups blasted the plan for its reliance on carbon capture technologies, which they say allows oil refineries, cement plants and other industries to continue polluting in disadvantaged neighborhoods. They also pointed to a little-noted element of the plan that calls for the expansion of natural gas capacity as a failure by the air board.

“At a time when we need to be planning for a phaseout of fossil fuels, our top air regulators are instead planning for a massive expansion of dirty gas-fired power plants,” Ari Eisenstadt, campaign manager for Regenerate California, said in a statement. The group is a partnership between the California Environmental Justice Alliance and the Sierra Club that advocates for clean energy.

“Forcing people to pick certain jobs, certain cars, certain homes, and certain times to use energy is out of touch with how ordinary people live," WSPA President Catherine Reheis-Boyd said in a statement.

Changing how buildings and means of transportation are powered is at the center of the air board's plan. It suggests the state require all new homes to have electric appliances starting in 2026 and new businesses by 2029. For existing homes, 80% of appliance sales should be electric by 2030 and 100% by 2035. That would help ensure older homes transition to electric-powered appliances when owners need to upgrade.

The plan would put significant new demand on the electric grid, requiring the state to rapidly scale up solar power and storage options, as well as hydrogen infrastructure including pipelines.

California's 2045 carbon neutrality goal stems from an executive order then-Gov. Jerry Brown signed in 2018. But the air board has been required to release a roadmap for achieving the state's climate goals every five years since 2008.

The last version of the plan explored how California will meet a state law requiring a 40% reduction in greenhouse gas emissions from 1990 levels by 2030. Some observers of the process had called for a robust analysis of the state's progress toward the 2030 goal, including the role California's signature cap-and-trade program was expected to play.

But the 200-plus page document released Tuesday includes just a small section on the state's progress toward 2030 and does not directly lay out what level of emissions reductions are expected from the various programs the state already has in place. It says the role of cap and trade in achieving the state's goals will likely diminish. The program requires businesses to buy credits equal to how much carbon they want to emit, with the goal of spurring reductions overtime as the price of credits increase.

The air board won't assess whether changes are needed to reach the 2030 goal until after the scoping plan is finished, the plan said.