Feds to Require Valves on New Pipelines to Prevent Disasters

But safety advocates said the move would not have averted the accidents that prompted the new rule. 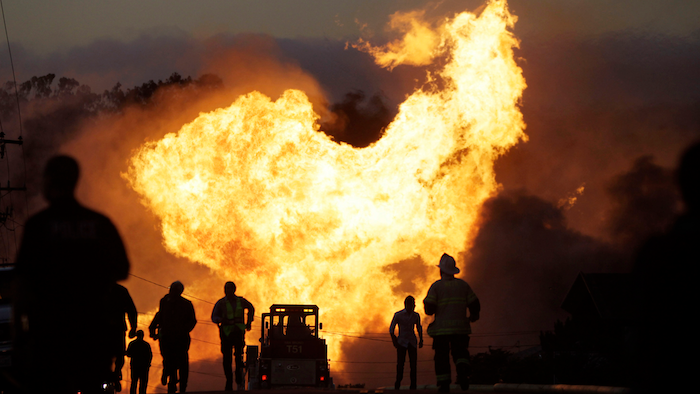 BILLINGS, Mont. (AP) — U.S. officials on Thursday adopted a rule aimed at reducing deaths and environmental damage from oil and gas pipeline ruptures — a long-delayed response to fatal explosions and massive spills that have occurred over decades in California, Michigan, New Jersey and other states.

But safety advocates said the move by the U.S. Transportation Department would not have averted the accidents that prompted the new rule. That’s because it applies only to newly constructed or replaced pipelines — and not to hundreds of thousands of miles of lines that already crisscross the country, many of them decades old and corroding.

The rule requires companies to install emergency valves that can quickly shut off the flow of oil, natural gas or other hazardous fuels when pipelines rupture. It came in response to a massive gas explosion in San Bruno, California, that killed eight people in 2010, and to large oil spills into Michigan’s Kalamazoo River and Montana's Yellowstone River and other spills.

The National Transportation Safety Board since the 1990s has recommended the use of automatic or remote controlled valves on large pipelines — whether they are existing or new — to reduce the severity of accidents. Following a 1994 gas pipeline explosion and fire that destroyed eight buildings in Edison, Jersey, the safety board urged the Transportation Department to expedite requirements for shut-off valves in cities and natural areas.

But pipeline companies for years resisted new valve requirements because of the expense of installing them and concerns they could close accidentally and shut off fuel supplies.

Transportation Secretary Pete Buttigieg said the more stringent regulations for the industry were needed because too many people have been harmed by pipeline failures.

He said installation of the valves would also protect against large releases of methane, a highly potent greenhouse gas blamed for helping drive climate change.

"Today we are taking an important step to protect communities against hazardous pipeline leaks — helping to save the lives, property, and jobs of people in every part of the country while preventing super-polluting methane leaks.” Buttigieg said.

But the group said exempting pipelines that are already in the ground means it would not prevent a repeat of the accident at San Bruno, which involved a pipeline that was more than 50 years old.

“This rule falls far short of the NTSB recommendation and will offer no additional safety to communities living near existing pipelines," said Bill Caram, executive director of the safety trust.

The government estimated it would cost a combined $5.9 million annually for companies to comply with Thursday’s rule. By comparison, industry representatives said a single valve on an existing line could cost up to $1.5 million and it would take billions of dollars to retrofit lines nationwide.

Industry representatives were closely involved in crafting the rule. Their request to allow valves to be more widely spaced along pipelines and remove the requirement for some low-risk pipes was rejected. However, transportation officials adopted some of industry recommendations that will give operators latitude to make adjustments to where valves are placed.

Amy Andryszak, president of the Interstate Natural Gas Association of America, said her organization and companies it represents were still reviewing the rule but were “generally supportive" of rules that encourage safety.

Experts say automatic valves can help eliminate some human-caused errors that contribute to accidents, such as a delay of more than 17 hours to confirm the 2010 Kalamazoo, Michigan, pipeline rupture because workers ignored alarms indicating a possible spill. The break released more than 800,000 gallons (3,600,000 liters) of crude oil and caused roughly $1 billion in property and environmental damage.

In San Bruno, a 30-inch (76-centimeter) gas pipeline exploded and burned like a massive blowtorch in a suburban California neighborhood for 89 minutes before a manual valve was used to shut it down. An AP investigation found that pipeline operator Pacific Gas & Electric Co. agreed as far back as 1997 that remotely operated valves did a better job of protecting public safety, but opted against using them widely because they weren’t necessary or required.

Officials with the Transportation Department's Pipeline and Hazardous Materials Safety Administration did not immediately respond to questions about the new rule.

Also missing from the new rule are standards for equipment that can detect when and where leaks hit, a recurring problem in pipeline accidents, Caram said.

Instead, the rule says pipeline companies must quickly take steps to confirm a spill if they get an alarm or other notification, but the confirmation process itself remains up to the company.

Faulty leak detection systems played a role in recent accidents including a 350,000 gallon diesel oil spill in December into a wetlands outside New Orleans and an underwater rupture off California's coast last October that fouled the ocean with tens of thousands of gallons crude oil.