The proposal would require companies to disclose their greenhouse gas emissions and climate risks. 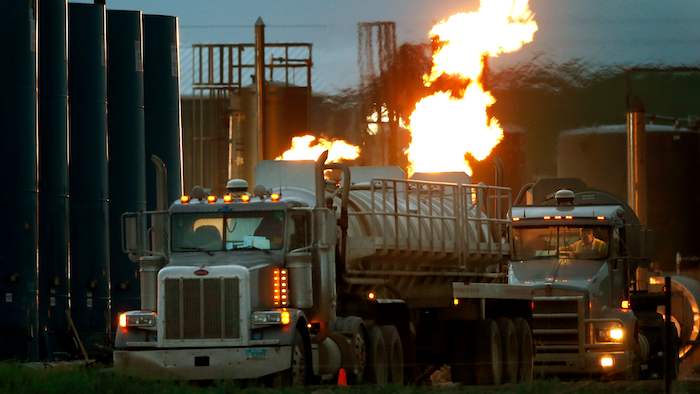 WASHINGTON (AP) — Companies would be required to disclose the greenhouse gas emissions they produce and how climate risk affects their business under new rules proposed Monday by the Securities and Exchange Commission as part of a drive across the government to address climate change.

Under the proposals adopted on a 3-1 SEC vote, public companies would have to report on their climate risks, including the costs of moving away from fossil fuels, as well as risks related to the physical impact of storms, drought and higher temperatures caused by global warming. They would be required to lay out their transition plans for managing climate risk, how they intend to meet climate goals and progress made, and the impact of severe weather events on their finances.

The number of investors seeking more information on risk related to global warming has grown dramatically in recent years. Many companies already provide climate-risk information voluntarily. The idea is that, with uniform required information, investors would be able to compare companies within industries and sectors.

“Companies and investors alike would benefit from the clear rules of the road” in the proposal, SEC Chairman Gary Gensler said.

The required disclosures would include greenhouse gas emissions produced by companies directly or indirectly — such as from consumption of the company’s products, vehicles used to transport products, employee business travel and energy used to grow raw materials.

The SEC issued voluntary guidance in 2010, but this is the first time mandatory disclosure rules were put forward. The rules were opened to a public comment period of around 60 days and they could be modified before any final adoption.

Climate activists and investor groups have clamored for mandatory disclosure of information that would be uniformly required of all companies. The advocates estimate that excluding companies’ indirect emissions would leave out some 75% of greenhouse gas emissions.

“Investors can only assess risks if they know they exist," Mike Litt, consumer campaigns director of the U.S. Public Interest Research Group, said in a prepared statement. “Americans’ retirement accounts and other savings could be endangered if we don’t acknowledge potential liabilities caused by climate change and take them seriously."

“Climate risks and harms are growing across our communities with threats to our economy," said Rep. Kathy Castor, D-Fla., chair of the House Select Committee on the Climate Crisis. “Investors, pension fund managers and the public need better information about the physical and transition-related risks that climate change poses to hard-earned investments,”

On the other hand, major business interests and Republican officials — reaching down to the state level — began mobilizing against the climate disclosures long before the SEC unveiled the proposed rules Monday, exposing the sharply divided political dynamic of the climate issue.

Hester Peirce, the sole Republican among the four SEC commissioners, voted against the proposal. “We cannot make such fundamental changes without harming” companies, investors and the SEC, she said. “The results won’t be reliable, let alone comparable.”

The SEC action is part of a governmentwide effort to identify climate risks, with new regulations planned from various agencies touching on the financial industry, housing and agriculture, among other areas. President Joe Biden issued an executive order last May calling for concrete steps to blunt climate risks, while spurring job creation and helping the U.S. reduce greenhouse gas emissions that contribute to climate change.

Biden has made slowing climate change a top priority and has set a target to cut U.S. greenhouse gas emissions by as much as 52% below 2005 levels by 2030. He also has said he expects to adopt a clean-energy standard that would make electric power carbon-free by 2035, along with the wider goal of net-zero carbon emissions through the economy by 2050.

“This is a huge step forward to protect our economy and boost transparency for investors and the public," White House national climate adviser Gina McCarthy tweeted as the SEC acted.

The premier business lobby, the U.S. Chamber of Commerce, and the American Petroleum Institute, the oil industry’s top trade group, expressed objections in letters to the SEC last year.

Frank Macchiarola, senior vice president of policy, economics and regulatory affairs at API, said Monday the group is concerned that the SEC's proposal could require disclosure of information that isn't significant for investors' decisions, “and create confusion for investors and capital markets."

“As the (SEC) pursues a final rule, we encourage them to collaborate with our industry and build on private-sector efforts that are already underway to improve consistency and comparability of climate-related reporting," Macchiarola said in a statement.

The threat that opponents could take the SEC to court over the regulations has loomed.

Last June, a group of 16 Republican state attorneys general, led by Patrick Morrisey of West Virginia, raised objections in a letter to SEC Chairman Gensler. “Companies are well positioned to decide whether and how to satisfy the market’s evolving demands, for both customers and investors,” they said. “If the (SEC) were to move forward in this area, however, it would be delving into an inherently political morass for which it is ill-suited.”

Morrisey previously threatened to sue the SEC over expanded disclosures from companies of environmental, social and governance information.