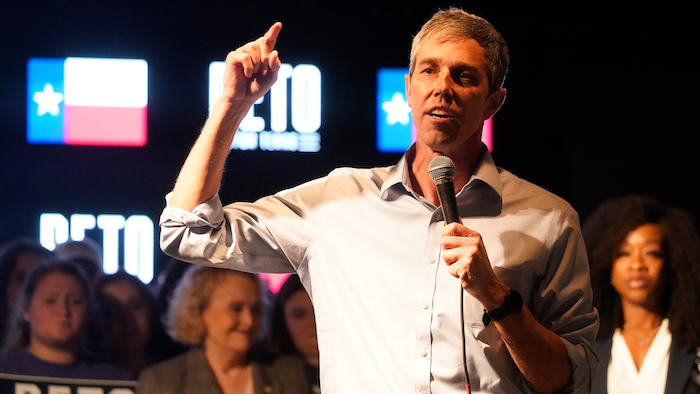 O'Rourke, who won the Democratic nomination for governor last week, called the lawsuit frivolous during a news conference Monday. Court records show it was filed in February in rural West Texas.

The donor, Kelcy Warren, is the chairman of Energy Transfer. The oil pipeline company reported $6.7 billion in net income last year, including about $2.4 billion in earnings related to the catastrophic February 2021 winter storm in Texas that sent natural gas prices soaring. Four months later, Warren gave the Abbott campaign $1 million, his largest single political contribution in a decade of donations to Republican candidates in Texas, according to state campaign finance records.

O'Rourke has made the failure of Texas' power grid — and Abbott's handling of the aftermath — a cornerstone of his underdog campaign. He has accused the two-term governor of letting energy companies off the hook by not mandating more significant industry oversight or weatherization.

O'Rourke has tweeted that energy executives “bought off” Abbott and at times has singled out Warren, saying during one campaign stop that the contribution “looks like a bribe to me.”

“O’Rourke intended that his malicious and baseless defamatory statements publicly humiliate Warren and discourage others from contributing to Governor Abbott’s campaign,” the lawsuit reads.

Energy Transfer said in a statement that comments by O’Rourke are “flat-out false.” Renae Eze, a spokeswoman for Abbott, said their campaign “is in no way involved in this lawsuit.”

Before last month's primary, O'Rourke spent two weeks highlighting the fallout from the winter storm in stops across Texas. He accused Warren of trying to shut him down.

“We're on the most solid ground possible,” O'Rourke told reporters in Dallas.