The company claims that two ships dragged their anchors across its underwater pipeline. 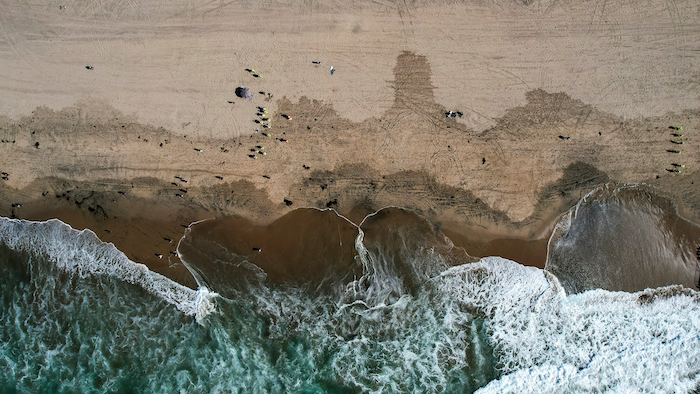 Amplify Energy Corp., which owns the pipeline that ruptured and faces a criminal charge for its oversight, claims that in January 2021 two ships dragged their anchors across the pipeline that ferried crude from offshore oil platforms to the coast.

The federal court filing also accuses the Marine Exchange of Southern California of failing to route the ships to deeper waters before an impending storm and failing to inform Amplify after the anchor-dragging incidents. The ships are MSC Danit, operated by Mediterranean Shipping Company, S.A,, and the COSCO Beijing, operated by Costamare Shipping Co., S.A.

"It is entirely foreseeable that allowing massive container ships to remain anchored near a pipeline might, in the event of a storm, result in damage to that pipeline and subsequent harm to the environment," Amplify wrote in its filing, adding more than 20 other vessels left anchorages outside the ports of Los Angeles and Long Beach to ride out the storm's high winds and waves in deeper water.

Amplify alleged that had the ships and Marine Exchange not been negligent, the spill wouldn't have happened.

The filing adds the exchange, which logs shipping activity in the heavily traveled region, to ongoing litigation over the spill. Amplify already faces federal lawsuits over damages incurred by local fisherman, tour operators and others stemming from the October spill of about 25,000 gallons (94,600 liters) of crude oil into the Pacific Ocean.

The Marine Exchange declined to comment and referred questions to the Coast Guard, with which it operates vessel traffic services, according to the exchange’s website. A message was also left for the Coast Guard.

The MSC Danit and COSCO Beijing were already named in the ongoing litigation. An email message was sent to MSC. No one answered a phone listed for COSCO in Los Angeles.

While less severe than initially feared, the oil spill about 4 miles (6.4 kilometers) offshore shuttered beaches for a week and fisheries for more than a month, oiled birds and threatened wetlands that Orange County communities have been striving to restore.

U.S. prosecutors last year charged Amplify and two of its subsidiaries with illegally discharging oil. They claimed the companies failed to respond to eight leak detection system alarms over a 13-hour period that should have alerted them to the spill and would have minimized the damage. Amplify has said workers believed they were false alarms.

The complaint filed Monday seeks damages for lost revenue from suspended oil production since the spill, and that the Marine Exchange not allow ships to anchor near the pipeline when severe weather is likely.